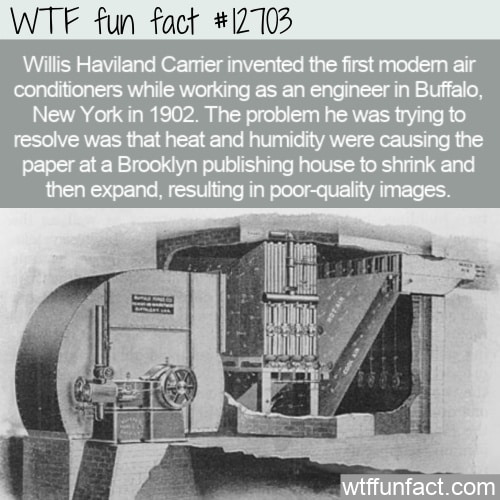 Willis Carrier is the man to thank if you’re cooling off in an air-conditioned space today. He was born in Angola, New York, and attended high school in Buffalo, where he would later work, he submitted the first drawings for a cooling unit in 1902.

Children and some laborers were already some time off in the summer when productivity was low because of heat and humidity. But, of course, many companies needed to keep on producing their goods.

Carrier, who got an engineering degree at Cornell and then returned to work as a research engineer at Buffalo Forge Company, was set upon the task.

But the primary goal wasn’t to give us all comfort during sweltering summers. In fact, according to the Willis Carrier website, the “young research engineer initialed a set of mechanical drawings designed to solve a production problem at the Sackett & Wilhelms Lithography and Printing Company in Brooklyn, New York.” Ironically, it was a problem with paper.

Also interesting is that Buffalo Forge was a supplier of forges, fans, and hot blast heaters. Creating cold air is the first challenge that needed addressing!

So why begin with paper? Why does paper need to be cool?

Well, it turns out it expands and contracts when heat and humidity are a problem – and that’s just not good when you need to print something.

Again, according to the website that now carries his life story:

“In the spring of 1902, consulting engineer Walter Timmis visited the Manhattan office of J. Irvine Lyle, the head of Buffalo Forge’s sales activities in New York. Timmis’ client, Sackett & Wilhelms, found that humidity at its Brooklyn plant wreaked havoc with the color register of its fine, multicolor printing. Ink, applied one color at a time, would misalign with the expansion and contraction of the paper stock. This caused poor quality, scrap waste and lost production days, Timmis said. Judge magazine happened to be one of the important clients whose production schedule was at risk. Timmis had some ideas about how to approach the problem but would need help. Was Buffalo Forge interested?”

Carrier was tasked with the problem because he already had a sterling reputation as a researcher and data collector, and this problem would need a lot of work.

But he did it. He was able to not only produce cool air but humidity as well by “replacing steam with cold water flowing through heating coils, balancing the temperature of the coil surface with the rate of air flow to pull the air temperature down to the desired dew point temperature.”

It wasn’t perfect, but it did the job. Carrier later started a company, and sold his updated creations to factories, and then to department stores and movie theaters in the 1920s.

The source down below is a comprehensive website on his invention and the impact it had on the world (just click through the dates on the left side of the page to follow the timeline to today). — WTF fun facts

Source: “The Invention That Changed the World” — WillisCarrier.com