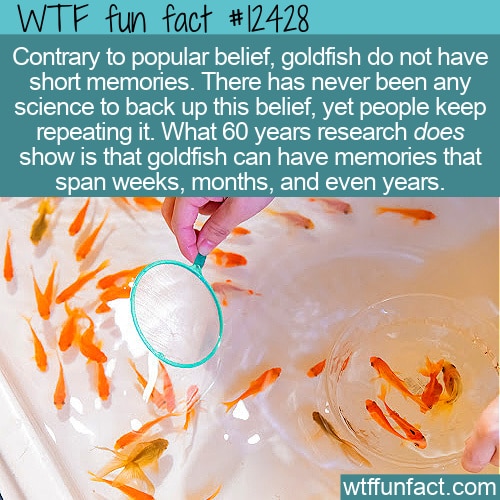 Sorry, Ted Lasso, but “be a goldfish” might not be the best advice for those ready to hold a grudge. Despite the widespread belief that a goldfish has a memory of just a few seconds, it’s simply false.

We’re not sure who made it up or when, but the first sign that it’s a made-up “fact” is that the information changes based on where you are in the world. Some say the goldfish has a 10-second memory, while others say it’s just 3 seconds. Regardless, none of this has ever been proven by science.

However, scientists have studied goldfish and tried to ascertain how long their memories might be. And you might be alarmed to know that these ubiquitous fish retain can memories for days, months, and even years. There are 60 years worth of research to back up those facts.

Of course, we can’t know exactly what goldfish think, but it’s not all that challenging to test the memory of just about any creatures through experimentation.

Culum Brown is an expert in fish cognition at Macquarie University in Australia. He told Live Science: “We’ve known about the reasonably good memories of goldfish since the ’50s and ’60s. Despite what everybody thinks, they’re actually really intelligent.”

Brown believes that one of the reasons we are so ready to believe that goldfish have almost no memory span is the way we treat them. If a fish had a 3-second memory, that boring glass bowl wouldn’t be cruel. And assuming they’re unintelligent allows us to rest easy believing our scaly pets don’t need any stimulation. Unfortunately, that’s just not true.

According to Brown, goldfish are often used in fish cognition and memory experiments. Research has shown that goldfish can remember where their food comes from, how to manipulate situations to get rewards, and even make their way through mazes.

Source: “Do goldfish really have a 3-second memory?” — LiveScience