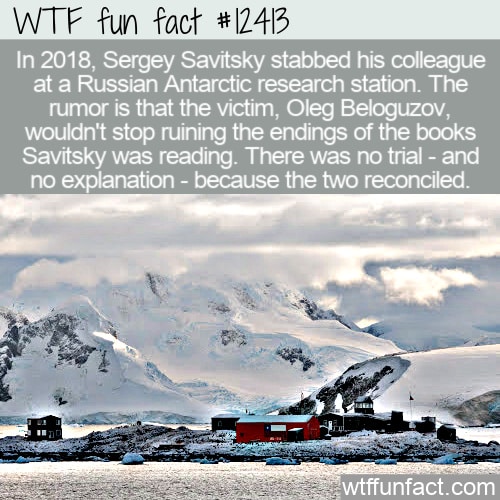 A Russian engineer working in Antarctica faced murder charges in 2018 after stabbing a colleague in the chest. According to news outlets Sergey Savitsky stabbed welder Oleg Beloguzov as was retribution for telling him the endings of all the books he was reading.

The stabbing took place at a Russian research station in the South Shetland Islands in Antarctica called Bellingshausen Station. Beloguzov’s life was not in danger from the wound, but he was evacuated to Chile for medical treatment. Savitsky was taken to St. Petersburg and arrested for the crime.

According to the LA Times, “Alexander Klepikov, the deputy director of the Arctic and Antarctic Research Institute, said of Savitsky and Beloguzov, ‘They are both professional scientists who have been working in our expeditions, spending yearlong seasons at the station. It is down to investigators to figure out what sparked the conflict, but both men are members of our team.'”

There were some rumors that alcohol was also involved in the conflict.

Some news outlets claimed the rumor about the books is untrue and that the engineer was suffering from the trauma of being at a remote location for so long.

Interestingly, the case never went to court since Savitsky and Beloguzov reconciled and the latter didn’t want to press charges. – WTF Fun Facts