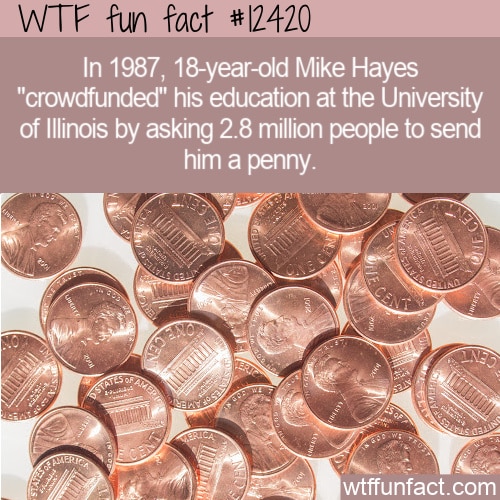 Long before Kickstarter or GoFundMe were a thing – and even before the Internet – a student named Mike Hayes managed to crowdfund part of his college education. It was 1987, and Mike Hayes’ parents had already put his siblings through college and didn’t have much left to offer him. He had $2,500 in his savings account, but his tuition at the University of Illinois was $28,000.

Hayes would call his plan “the only idea I’ve ever had.” That idea involved asking 2.8 million people to give him just one penny to reach his $28,000 goal.

But how do you get the word out to so many people without the Internet? Well, the newspapers, of course!

Hayes got in touch with journalist Bob Green who wrote for the Chicago Tribune and whose articles were syndicated in nearly 200 newspapers worldwide. Interested to see what would happen, Green wrote the story, which was published September 6, 1987.

“I don’t really feel like I’m begging,” Hayes was quoted as saying in the piece. “I honestly believe … that no one will feel that it’s a hardship to send a penny to me.”

The article included a PO Box and instructions to “QUIT READING!” and “Go put the penny in the envelope.”

It seemed unlikely since sending a penny would actually cost people $.23 due to the cost of postage. And yet the idea did “go viral.” He received pennies, nickels, and even some larger donations from around the world.

In the end, Hayes received 2.9 million pennies along with 90,000 letters. It was enough to pay his college tuition bill. He was known on campus as “Penny Man.” – WTF Fun Facts

Source: “The Kid Who Crowdfunded His College Education — In 1987” — NPR News