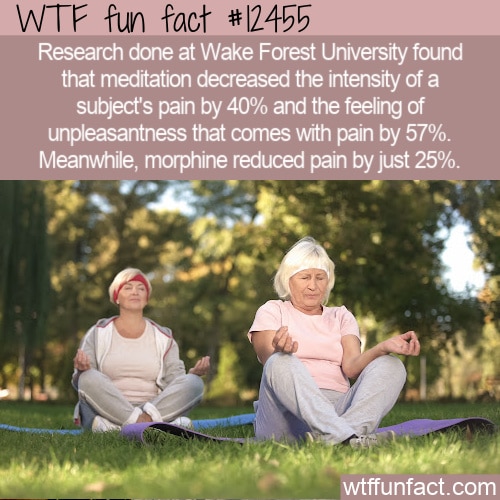 Pain is a sensitive topic (no pun intended). It’s subjective, for starters, so some people genuinely feel pain more (and pain affects them more) than others. When you’re in pain, it’s hard to conceive of something like meditation as a potential remedy. And to be fair, if you’ve never done it before, trying it for the first time minutes after you break your leg isn’t going to help.

Meditation has also become controversial since some people associate it with religion. But it doesn’t have to be Buddhist – most meditation is completely secular or customized to include elements of the practitioner’s own faith.

And here’s why it matters: we have an epidemic of painkiller use going on worldwide that has killed millions. Pharmaceutical companies are getting the blame, but that doesn’t do much good to people already experiencing addiction to opiates, for example. And recommending meditation to those people won’t replace receiving professional help at this point.

However, knowing that meditation can be a powerful tool can help set up those of us who have yet to experience serious acute or chronic pain for more success in managing it in the future. That doesn’t mean painkillers will become a thing of the past, but having a set of tools designed to draw on your own inner strength couldn’t hurt, right? (Again, no pun intended.)

So, as we pointed out in the photo, research from Wake Forest University and published in the Journal of Neuroscience found that meditation decreased the intensity of a subject’s pain by 40%. Pain also affects us in other ways that tend to make it worse by setting off a stress chain reaction in our bodies. Those overall feelings of unpleasantness were reduced by 57% in the group of meditators. Scans of their brains confirmed this, so researchers didn’t just take their word for it.

Even morphine didn’t have that kind of success in pain reduction.

But there are a few things worth keeping in mind:
– These were experienced meditators who had been trained to do it correctly (the technique used was called “focused attention”)
– While every subject experienced some pain reduction, it varied, with some only reporting an 11% reduction
– They did not later give these same people morphine; the researchers relied on known data about the pain reduction morphine provides
– While the study has been replicated, it was small, so more research needs to be done before we assume everyone can meditate their way through the pain

Despite these caveats, it’s pretty amazing to think about the power we have over our own bodies. –  WTF fun facts

Source: “Meditation instead of morphine — not so fast” — LA Times