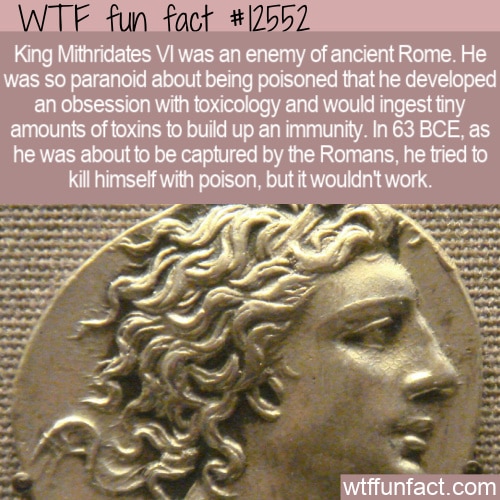 King Mithridates VI of Pontus (aka Mithridates the Great) ruled what is now eastern Turkey from 120-63 BCE. The ruled while the Roman Empire was in its prime, but was its sworn enemy. His goal was to build his own empire, which required taking parts of Rome.In fact, according to the ancient writer Plutarch, in 88 BCE, Mithridates’ armies slaughtered 150,000 Roman and Italian noncombatants in one day in his quest for land.

More recently, Mthridates VI has been referred to as The Poison King. His predecessor Mithridates V had been assassinated with poison and he became obsessed with studying toxicology. There is plenty of proof of this, but what we’re not entirely sure about is the story that he microdosed an elixer of toxins to build up an immunity to poisons in case someone tried to assassinate him.

Ancient writers attest to the story, but modern historians aren’t so sure. Still, historians admit that there are enough sources with stories of some of his public attempts to ingest poison that it’s partly true.

It’s also likely that he conducted experiments on potential poison remedies by using prisoners as his subjects.

Ancient writer Pliny the Elder wrote that Mithridites VI created his own elixer made up of toxins he thought would make him immune to poisoning. It became known mithridate (or mithridatium).

But if the legends are true, all of these plans backfired on the king. Eventually, Rome came for him and on the eve of his capture, he did try to poison himself with the lethal dose of poison he kept hidden in his sword’s hilt. But it didn’t work. Some believe that it was because he shared it with his daughters (who both died) and there wasn’t enough left for him. But this only adds to the theory that he may have, in some way, made himself immune to poison. Of course, he didn’t save the recipe.

In the end, Mithridates VI convinced a servent to slay him with a sword to avoid being captured by the Romans. And there’s really no antidote for that. –  WTF fun fact