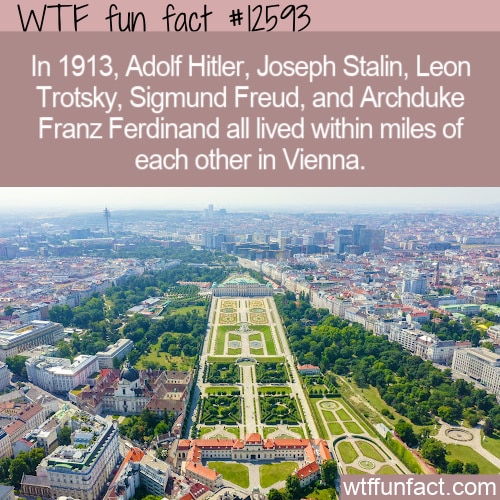 In 1913, Vienna had over two million inhabitants and was home to many people who would go on to be both famous and infamous. And while we might look at a borough in Manhattan and marvel over the notable people who live within just a few miles of one another, that doesn’t make it seem any less weird that Adolf Hitler, Joseph Stalin, Leon Trotsky, Sigmund Freud, and Archduke Franz Ferdinand were all part of the same neighborhood at the same time over 100 years ago.

Vienna’s coffeehouses were notorious cauldrons of intellectual activity at the time, and it’s not unlikely that these men all got coffee at the same place.

A Reddit moderator who goes by the handle u/commiespaceinvader explained it all more succinctly:

“In 1913, Hitler lived in a Men’s Dormitory in Meldemannstraße 27 in Vienna’s twentieth district. Being rejected from the art academy, he lived off the sale of his paintings and was unable to afford another residence, so he lived in a men’s dormitory, an institution set up for people without a fixed residence, where for a weekly rent of 2,5 Kronen, you could rent a bed.

In the same year, Trotsky lived at Rodlergasse 25 in Vienna’s 19th district. He worked as a journalist from Vienna reporting on the Balkan wars and publishing the Vienna edition of Pravda. Trotsky had lived in Vienna before after being exiled for political agitation in 1902. After the attempted Revolution of 1905 had been crushed, Trotsky again fled Russia and moved to Vienna where he had good contacts with the local Social Democratic Party and through them found employment as a journalist. Trotsky’s favorite hang-out was Vienna’s Cafe Central where he was relatively well known. There is an unsubstantiated anecdote that in 1917 when the Russian Revolution broke out, a fellow patron of the Central and an officer of the Austrian Army is to have said “And who is supposed to lead this revolution? Mr. Trotsky from Cafe Central?”

In 1913 Stalin visited Trotsky in Vienna and lived there for one month in Vienna’s 12th district in Schönbrunner Schloßstraße 30. He was sent there by Lenin to do research for an article called “Marxism and the National Question” in effect researching how Marxism in the multiethnic empire of the Habsburg’s could be applied. The house still bears a commemorative plaque, financed by the Austrian Communist Party in 1949 and put there with permission of the Soviet occupational government of Austria. As part of the state contract of Austria, signed in 1955, the Austrian government is obligated to take care of the plaque…Freud’s famous address was Berggasse 19 where today, Vienna’s Freud Museum is. And Archduke Franz Ferdinand worked in the Hofburg and had quarters in Schönbrunn palace.

…both Hitler and Trotsky are attested to have visited Cafe Central frequently for it was one of Vienna’s prime coffee houses. When Stalin was there in January 1913, he too went there together with Trotsky. It would be speculation to say anything definitively but who knows, maybe at some point in January 1913, they all were there at the same time.“

Source: “1913: When Hitler, Trotsky, Tito, Freud, and Stalin all lived in the same place” — BBC News