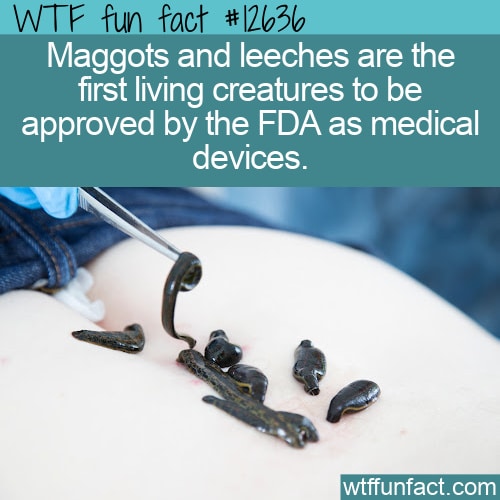 Sure, it sounds gross. It is gross. But so is a lot of the creative stuff doctors do to keep us alive.

As it turns out, the resurgence of therapies that use maggots and leeches has saved thousands of lives. Doctors can use them because they are FDA-approved as medical devices, despite being living creatures.

Now, no one heads to the local community garden or dumpster to get medicinal leeches and maggots. They are created in labs within very specific parameters.

So, let’s start with maggots. How can they possibly be medicinal?

The maggots used in medicine are the larvae of bottle-green blowflies. Because maggots only eat dead skin and not living skin, they’re actually perfect for cleaning infected wounds. Instead of having some first-year resident scrubbing out your open wound, maggots are even more gentle by comparison. In fact, since they’re eating dead tissue that’s already numb, you don’t feel the chomping at all. And they do a darn thorough job!

Leeches, on the other hand, are known as blood drinkers. Both of these creatures have been used in medicine for thousands of years, but are just making a comeback. However, leeches weren’t always applied in helpful ways in the past. Now, they’re used to clean up pooled blood in the body.

According to Discover Magazine: “When blood starts pooling instead of circulating, the area swells, and the lack of fresh, oxygenated blood causes skin tissues to die. Leeches can prevent that from happening.”

In the 1980s, as more wounds became resistant to antibiotics, a few doctors wanted to try maggots again and got some men at the VA hospital to agree. After the trials worked, the doctor in charge realized that in order to share the maggots with colleagues, he had to file paperwork with the FDA, and they turned out to be hard to regulate. But it was possible and in 2003, the FDA approved maggots as a medical device. Six months later, leeches were approved as well.

Obviously, not all hospitals are keen to use them (and patients aren’t generally big fans of the idea either). – WTF fun facts