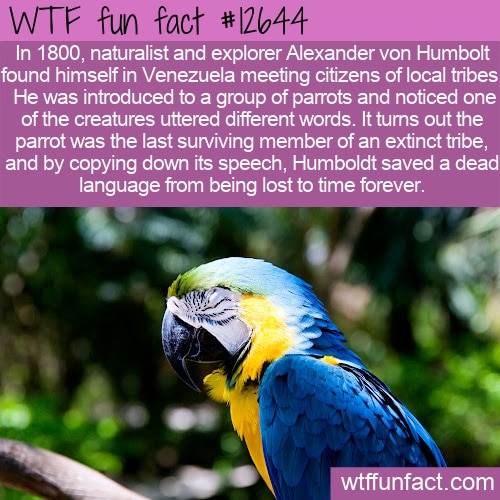 German naturalist Alexander von Humboldt embarked on a 5-year exploration of North and South America in 1799. His trip was successful, and when he returned home in 1804, he had an extensive collection of plant and animal specimens

Humboldt also took voluminous notes, including some interesting jottings from a trip through Venezuela in 1800 where he spent some time chatting with a local parrot.

According to Mental Floss:

“According to legend, during his exploration of the Orinoco River, Humboldt met and stayed with a local indigenous Carib tribe near the isolated village of Maypures. The tribe, so the story goes, had a number of tame parrots kept in cages around the village, many of which had been taught to speak—although one, Humboldt noted, sounded noticeably different from the rest. When he asked the locals why this parrot sounded so unusual, he was told that it had belonged to a neighboring tribe, who had been the Caribs’ enemies.”

In other words, the parrot was speaking a different language than the rest. And sadly, the parrot was the only speaker left. The rest of the tribe had been wiped out, and not a single native speaker remained. Just the parrot. It was the last vestige of their linguistic culture.

Being the keen observer and recorder, Humboldt wrote down what the parrot sounded like, transcribing the sounds phonetically and coming out with about 40 words from the parrot’s (and the lost tribe’s) vocabulary.

We’ll never know how accurate the language is, but the notebook holds the last of what we have.

Interestingly, in 1997, an artist taught two more parrots to speak the language based on Humboldt’s notebook.

Some think the parrot’s story is mere legend, but Humboldt recounted his trip down the Orinoco river in his Equinoctial Regions of America in great detail and accurately described the Atures tribe that the parrot spoke the language of. – WTF fun facts

Source: “The Parrot That Kept A Language Alive” — Mental Floss