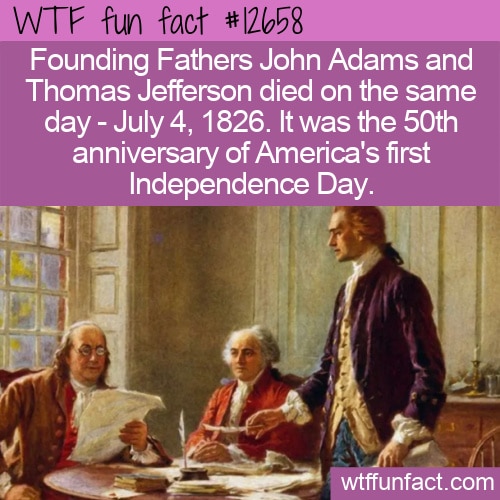 The 4th of July may just be the most common day for U.S. presidents to die.

As America celebrated 50 years of independence on July 4, 1826, it also mourned the passing of two of the men responsible for it. 83-year-old Thomas Jefferson and 90-year-old John Adams died just hours apart on that day. And despite their advanced ages, it came as a shock to people, who found it very suspicious (apparently, we didn’t need the internet to start conspiracy theories).

People didn’t necessarily suspect foul play – they were not anywhere near one another at the time. In fact, some people found it to be the work of the divine. In a eulogy, Daniel Webster called it “proofs that our country and its benefactors are objects of His care.”

It is a bigger coincidence than one might normally feel comfortable with, however. It’s one thing to die on the same day and quite another for that day to be such a momentous occasion.

If there was another other going on, it may have simply been that both were very ill and on the verge of death but tried their best to hang on to see that 50th anniversary.

If you’re a fan of weird coincidences, you may also be interested to know that James Monroe, the fifth president of the United States, also died on July 4 (but in 1831). And Zachary Taylor is presumed to have caught cholera on July 4th immediately following the holiday festivities in1850 (though he did not die until July 9th). – WTF Fun Facts

Source: “Two Presidents Died on the Same July 4: Coincidence or Something More?” – History.com