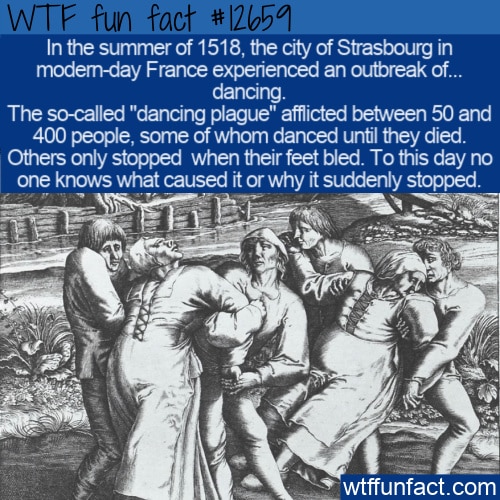 The summer of 1518 was a weird one in part of the Holy Roman Empire. A plague of sorts broke out in July in the city of Strasbourg, and its main symptom was giving people the uncontrollable urge to dance.

It all began with a woman called Frau Troffea, who was seen stepping out into the street and twisting and twirling all alone to no music at all. Multiple sources say she danced for a week.

When others joined her, it wasn’t to keep the party going. They couldn’t help themselves. They danced until they literally couldn’t dance anymore – either because their feet were broken or bleeding or because they passed out or even died of a heart attack.

It’s said that by August, nearly 400 because afflicted with the mysterious and destructive desire to dance themselves to death. By September, officials had taken the remaining dancers to a mountain shrine…allegedly to pray away their affliction.

To say doctors handled it poorly is both an understatement and a bit unfair, considering the world had no germ theory of disease yet. Some blamed foot, others called it a “hysteria,” and some local physicians blamed it on “hot blood” that made bodies try to gyrate out the fever. They even had stages built, and professional dancers brought in to try to ease whatever was happening in people’s bodies and minds. Not surprisingly, it didn’t work.

In what probably seemed like a good idea at the time but feels a bit cringy to think about now, the town hired some backup musicians. That didn’t work either (and it probably made things worse).

A dance marathon sounds like fun and games until people start dying, and reports say they did by the dozens.

Similar dance plagues happened throughout the empire, but none were as extensive and well-documented as the 1518 incident.

The best explanation we have is that it was such a stressful time in Strasbourg that summer (disease and famine were rampant) that it triggered hysteria around the city that manifested as dancing because of St. Vitus, a Catholic saint people believed had the power to curse them with a dancing plague. –  WTF fun facts