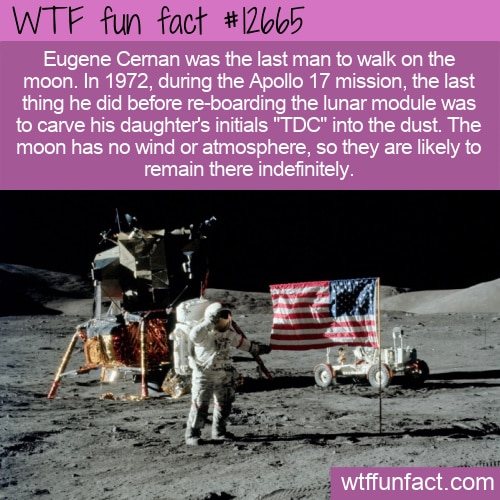 During Apollo 17, Cernan and his fellow astronaut, Harrison Schmitt spent 22 hours and 6 minutes outside, and they still hold the record for the longest extravehicular activity on the moon.

Cernan then drove the lunar rover about a mile away from the takeoff site so it could photograph the ship’s take-off the following day. Before he walked back to the lunar lander, he wrote in his autobiography that he knelt by the rover and drew his daughter Tracy’s initials into the moon dust.

Cernan spoke these words as he climbed into the lunar lander and left the moon:

“As I take man’s last step from the surface, back home for some time to come – but we believe not too long into the future – I’d like to just (say) what I believe history will record. That America’s challenge of today has forged man’s destiny of tomorrow. And, as we leave the Moon at Taurus–Littrow, we leave as we came and, God willing, as we shall return, with peace and hope for all mankind. Godspeed the crew of Apollo 17.”