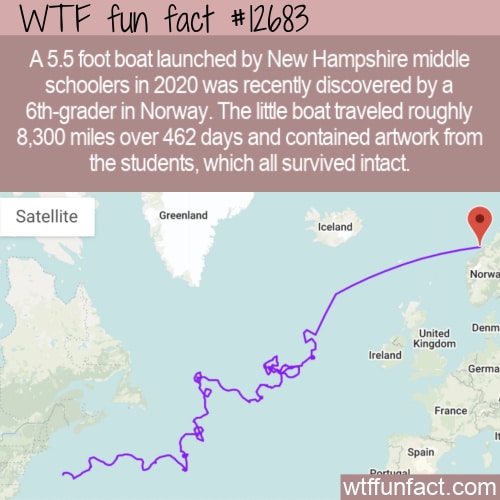 Right before the pandemic closed schools, students at New Hampshire’s Rye Junior High School were working on a science project to launch a boat into the ocean with GPS attached to see where it would end up and what route it would take.

According to NPR: “Rye Junior High and the nonprofit Educational Passages — which says it aims to connect students around the world to the ocean and one another — started working together on the project in 2018, according to a release. The organization provided students with an assembly kit in 2020, though the construction and launch were complicated by the coronavirus pandemic.”

They thought it was lost when GPS stopped transmitting for a while, but eventually, it pinged again from a little uninhabited island off the coast of Norway. They just needed someone to retrieve it. Enter local sixth-grader, Karel Nuncic, who took a boat with his parents and puppy out to the island (which they could see from their coastal home) to recover the vessel. It wasn’t in great shape, but the hull containing artwork from the students who launched it was intact and dry.

“RJH’s miniboat made it across the Atlantic! Our students put together a 5 foot drifter and had it launched into the middle of the Gulf Stream current on Oct. 25, 2020. Which way did it go? The onboard GPS recorded its location, most of the time. Then it went silent for a while. On Sunday, it pinged again and its location was on a small island off of Norway! Stayed tuned for more of the story! Here are the before and after photos of our miniboat and a map of its path. (Thanks to Educational Passages and The Clipper Foundation!)”