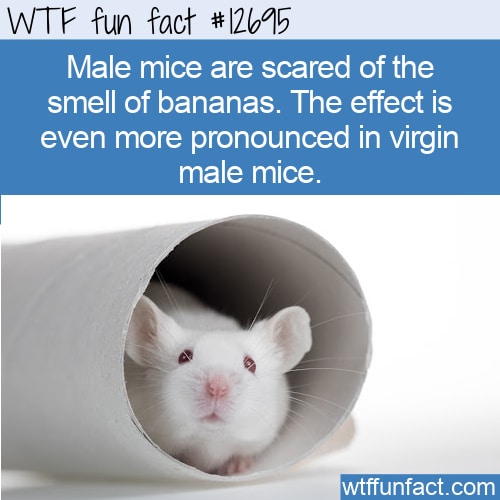 We may have never noticed on our own that male mice harbor a fear of the humble banana. But scientists studying the fear responses of male mice to pregnant and lactating female mice made the connection.

Long story short, male mice can be very aggressive towards baby mice (or “pups), especially virgin male mice who see them as genetic competition. That’s why female mice have evolved to produce a compound, called n-pentyl acetate, in their urine that produces a stress and fear response in all male mice (but especially virgins).

Bananas enter the equation because they also happen to emit a compound that produces a fear response in male mice. They don’t contain n-pentyl acetate but rather isoamyl (or isopentyl) acetate.

According to IFL Science:

“The team bought banana oil extract from the supermarket and placed it inside the cages of male mice to measure their stress levels, which increased significantly in response. The team believe that the stress response in the mice is similar to the stress response when about to engage in a fight.”

At least now we know one more strategy for getting rid of male mice! – WTF fun facts