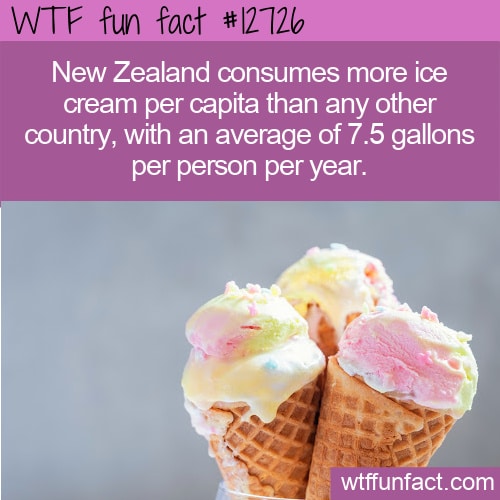 If you thought Americans were the biggest ice cream eaters in the world (or maybe Italians with their gelato), think again. New Zealanders come in first, consuming an average of 7.5 gallons of ice cream per year. Americans eat about 4.4 gallons, so while they come in second, they’re pretty far behind.

New Zealand is known for its epic dairy products, and they have a highly competitive ice cream industry.

The two main ingredients, milk and sugar became readily available in New Zealand in the 1800s. Sugar was readily imported from Australia, and Durham dairy cows were introduced in 1814, followed by Jerseys, Friesians, and Ayrshires in the 1860s and 70s, once people realized the grazing land was ideal.

But what about the ice? That’s also integral in making ice cream.

Interestingly, New Zealand’s ice originally came from the US Great Lakes area. International ice sale was big business in the 1940s, and Great Lakes ice was shipped around the world on large ships. Giant cubes were stacked together and insulated by wood shavings. Melting did occur, but the giant cubes managed to make it to New Zealand!

Upon arrival, the ice was stored in insulated ice houses.

However, it was ice from Massachusetts’ Wenham Lake that went into making New Zealand’s first ice cream. It was harvested by the Wenham Lake Ice Company, founded by “Ice King” Frederic Tudor, and the “Wenham Ice” is mentioned in New Zealand’s earliest ice cream ads. – WTF Fun Facts