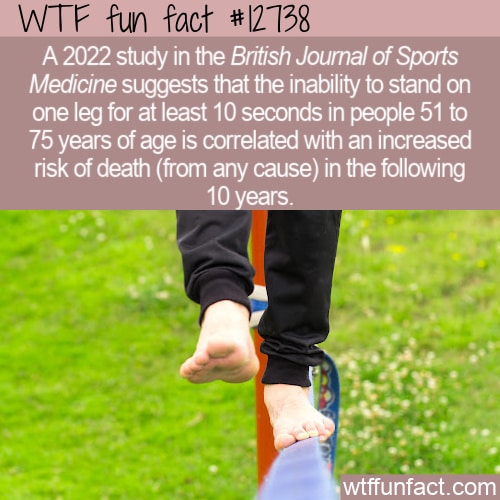 According to a new study in the British Journal of Sports Medicine, your ability to balance on one foot may indicate better health and a longer life expectancy.

People in the study who were aged 51 to 75 and couldn’t balance on one foot for over 10 seconds were more likely to die within the next ten years.

“While aging leads to a decline in physical fitness, muscle strength, and flexibility, balance tends to be reasonably well-preserved until a person’s 50s, when it starts to wane relatively rapidly, the researchers noted. Previous research has linked the inability to stand on one leg to a greater risk of falls and to cognitive decline.”

If you want to try it out, lift your foot and out the front of the foot behind your standing leg. Keep your arms at your side and look straight ahead (focusing on something in the distance often help maintain balance).

If at first you don’t succeed, that’s ok. You get three chances to get your body used to the task. You just can’t use anything to hang onto for support.

CNN explained the correlation between lifespan and balance in the study, citing one of the study’s authors:

“Being able to balance on one leg is important for older people for several reasons, and it is also reflective of wider fitness and health levels, said study author Dr. Claudio Gil Araújo at Exercise Medicine Clinic – CLINIMEX – Rio de Janeiro, Brazil. ‘We regularly need … a one-legged posture, to move out of a car, to climb or to descend a step or stair and so on. To not have this ability or being afraid in doing so, it is likely related to loss of autonomy and, in consequence, less exercise and the snowball starts,’ he explained.”

So, how did researchers get to their conclusion? One in five study subjects failed the test (balance is tricky!). Then the subjects were followed for seven years. During that time, 7% of study subjects died. But what was significant is that the proportion of people who failed the balance test was much higher than those who passed.

That doesn’t mean you’re doomed if you have bad balance. It just means that it may be indicative of other issues that may affect your health and long life. – WTF fun facts

Source: “Wobbly on one leg? Ability to balance is linked to a longer life, study finds” — CNN