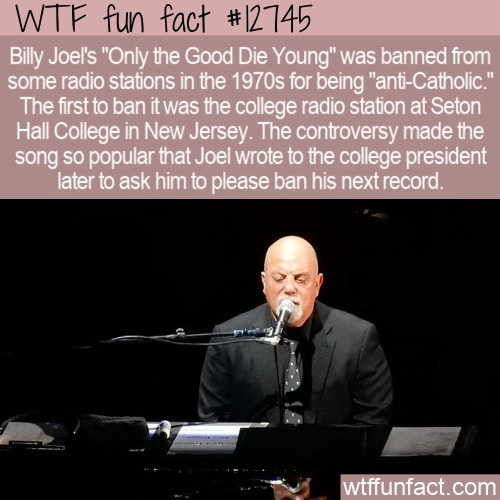 While it’s hard to tell if a story about Billy Joel and Notre Dame is real or an urban legend, one thing we do know is that the seat of the Catholic controversy over Billy Joel’s “Only the Good Die Young” was Seton Hall University in New Jersey.

The song brings up a bit about Catholic guilt, but three verses, in particular, offended the Catholic dioceses in places like New Jersey and Boston:

“Come out Virginia, don’t let me wait
You Catholic girls start much too late
Aw, but sooner or later it comes down to fate
I might as well be the one”

Joel told the magazine Performing Songwriter in 2008 that he didn’t write the song to be anti-Catholic but rather “pro-lust.” But that was enough for the Church.

“The song came out on The Stranger and was no big deal. But then Columbia decided to put it out as a single, and that’s when there were problems. There was a radio station at Seton Hall College in New Jersey. They banned it.”

After that, it got banned in Boston and Joel got a mini-reputation as being anti-Catholic. But that only made the song more popular.

“The single had been out a short amount of time and wasn’t doing well. The minute they banned it, it starting shooting up the charts, because nothing sells a record like a ban or a boycott. This record would have died out. Nobody would’ve heard it if they hadn’t tried to cut people off from it. As soon as the kids found out there was some authority that didn’t want them to hear it, they bought it in droves and it became this big hit.”

But some adults weren’t amused and sent the singer death threats. Of course, that didn’t stop him from playing it at concerts AND on Saturday Night Live. As Billy Joel recalled of “Only the Good Die Young”:

“I did it on Saturday Night Live and everybody was all freaked out,” Joel said. “They were saying, ‘You can’t do that on TV.’ I said, ‘Why not?’ Some people took offense at it, but there were all these novels written about Jewish guilt, so why not a song about Catholic guilt? Every Catholic I know is still recovering from this incredibly guilty upbringing they had. The song was supposed to be lighthearted. It was taken out of context with the rest of the album.”

Joel also told the magazine that he “ wrote letters to the arch-bishops and the president of Seton Hall saying, ‘Please ban my next record.’”

As for the Notre Dame story/urban legend, people still tell the story that Joel was invited to play a concert at the university in the 70s on the condition that he did not play the song. Then, he proceeded to play it 6 times in a row, earning him a ban from campus. While that latter part is not true (he visited for a talk and played a concert on May 25, 2022), he certainly did play the song in the 70s – but it may only be the case that he played the opening notes about 5 times throughout the concert before playing the whole song in one of his encores (and even changed out some lyrics to specifically address “Notre Dame and Saint Mary’s girls”).

Oh, and another fun fact: the song was originally written as a reggae song, but Joel’s drummer hated it so much that he threw his drumsticks at the singer after they played it for the first time. – WTF fun facts