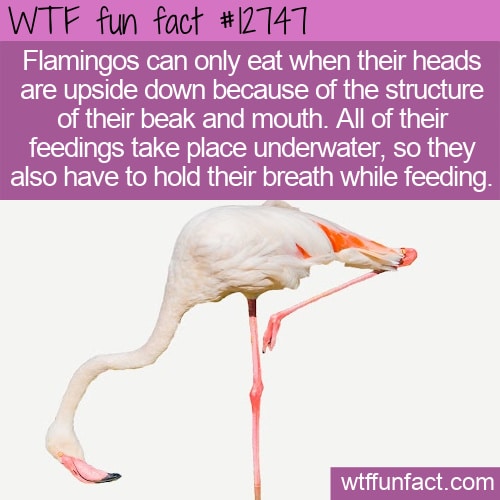 Because of the way their heads and beaks are built, flamingos eat upside down. Well, at least that’s how their heads are positioned.

Flamingo beaks scoop up water in the areas where they feed. Then, that water is processed through a structure called the lamellae, which acts as a filter. It ensures that water, sand, and other less tasty things are then expelled back into the water while the marine creatures (such as shrimp and brine flies) that flamingos eat are trapped inside. (Another fun fact: this food is also what makes flamingos pink!)

A flamingo’s tongue is designed to push the water back out through these filtration mechanisms.

According to the San Diego Zoo, “Greater and Chilean flamingos are larger and feed mostly on invertebrates such as brine flies, shrimps, and mollusks. They get these food items from the bottom mud by wading in shallow water. Sometimes they swim to get their food and sometimes by ‘upending’ (tail feathers in the air, head underwater) like ducks.”

It all happens quite fast, but if you take a look at how a flamingo is built, you’ll see that eating upside down is really the only way.

Of course, flamingos breathe air, which means that while they’re attempting to feed, they need to hold their breath – something they can do for up to a few minutes at a time. They need to poke their heads up every now and then to get more oxygen.

Flamingos eat upside down even on a zoo diet

According to the zoo, their flamingos get a special diet with all the nutrients they need. But even in these cases, they still use the same upside down stature to take in their food:

Flamingos are interesting creatures and there are still some habits we can’t explain – such as why they sometimes stand on one foot. No one has definitively explained that behavior yet. – WTF fun facts