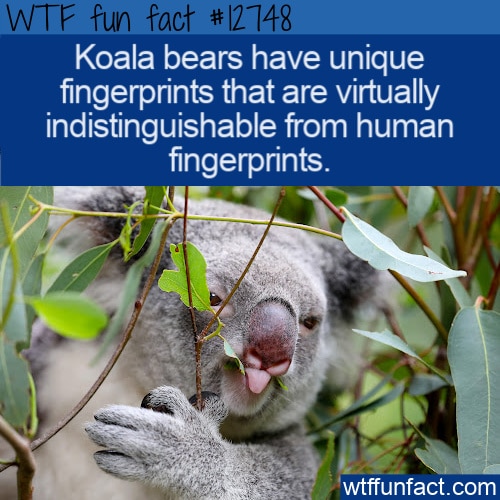 Koala bears have fingerprints just like apes and humans. This is surprising since our last common ancestor lived over 100 million years ago.

We tend to think of fingerprints as solely a product of our criminal justice system. And yet, those little lines on our fingers actually serve a purpose besides putting us at a crime scene.

The purpose of fingerprints

Our fingerprints help us grab and feel objects, and researchers believe they help our sense of touch. This isn’t so important to us anymore, but it is helpful to animals who can use touch sensations to judge whether leaves, for example, belong to the right tree.

Our fingerprints actually cause little vibrations when we run them over objects. And since koalas really only eat eucalyptus, they like to be sure they’re in the midst of the right kind of buffet before they start chowing down.

Since you can’t really tell a koala’s fingerprint from a human’s, at least in terms of patterns, they may be the perfect sidekick for a crime scene. There’s no koala bear fingerprint database, so you can pretty much just let them touch everything to upend an investigation (just kidding – don’t try this at home – or anywhere else for that matter).

However, if a koala at a zoo has committed a crime, theoretically, you could fingerprint the residents to figure out whodunnit. We don’t think that’s ever been a necessity, but it sounds like a good premise for a children’s crime novel (if those existed).

Koalas bears have fingerprints and other animals have…

While koala bears have human-like fingerprints, other animals have identifying marks on their paw pads as well.

According to New Scientist (cited below):

Individual cats and dogs, for example, have unique whisker patterns. Zebras have distinct stripe arrangements and individual leopards and spotted dolphins have their own spot patterns. Humpback whales also have unique markings on the underside of their tails.”

Source: “Do other animals have fingerprints? And what purpose do they serve?” — New Scientist