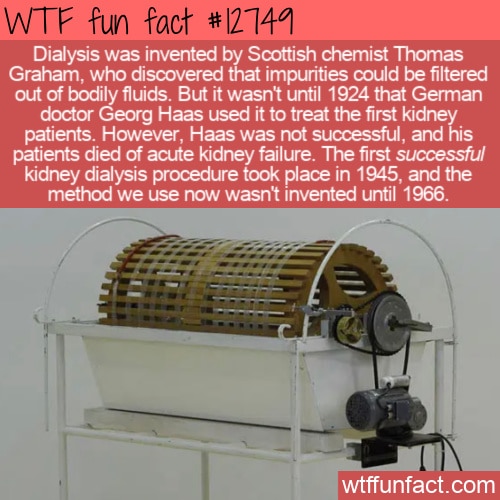 The development of kidney dialysis started centuries ago. Even doctors in the ancient world understood the kidneys played an important role in filtering bodily fluids. Galen’s treatise On the Natural Faculties mentioned doctors prior to his time investigating the organ and its function.

But figuring out how to replicate the filtering function of the kidneys didn’t happen until the 1800s when a Scottish chemist named Thomas Graham realized he could create a membrane to act as a filter to “clean” some bodily fluids (though he wasn’t exactly spot on about what he was filtering out).

Despite sometimes being referred to as the “Father of Dialysis,” his discoveries weren’t kidney-related. In fact, for decades, scientists were more concerned with trying to filter blood for trauma patients during surgery. That’s because they didn’t have blood banks, so when someone lost blood, they needed to preserve it for the patient but also needed a way of cleaning it up first.

Blood dialysis was performed on animals in the early 20th century, and the use of blood thinners was already in use to keep it from clotting (which is necessary if you want to put it back in the body!).

In 1924, a German doctor named Georg Haas realized the possibilities of dialysis for kidney patients. Since our kidneys are responsible for filtering out impurities, those in kidney failure need some extra help.

Haas seems to have had around six patients that used his dialysis machine, but it wasn’t quite ready for prime time yet. All of those patients died of kidney failure (possibly as a result of the dialysis not filtering adequately).

The “drum kidney” was introduced in 1945 by a Dutch doctor Willem Kolff, and because materials science was more advanced, the plastics and other materials he had at his disposal made the machine more effective for cleaning bodily fluids (and didn’t leach its own materials into patients either).

Before we get to today’s modern-day dialysis machines, there were many more people involved in the invention of dialysis – including chemists and physicians that improved upon past technology:

And these are just the preliminary steps we took on our way to modern kidney dialysis!