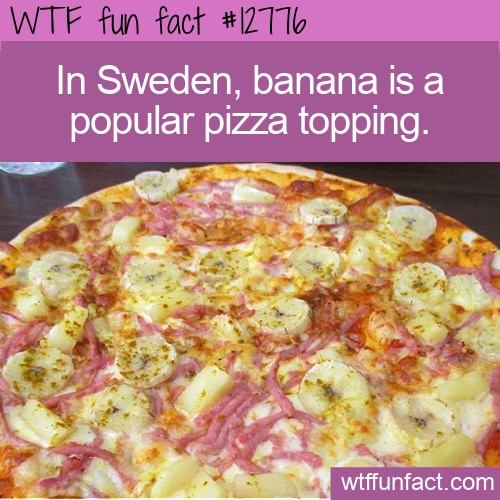 The rumor about Swedes liking bananas on their pizza started in 2017. In fact, Snopes (cited below) traced it back to a Tweet on August 11 of that year from Curators of Sweden. In it, “a social media campaign initiated by the Swedish Institute and VisitSweden, the pineapple-banana-curry topping trifecta made up the ‘most Swedish pizza there is.'”

We know what you’re thinking.

Well, to each their own. Maybe you’d like if it you tried it. As pizza purists, we’re just planning to let them be about the whole thing without venturing into dough-destroying territory.

As with all internet rumors that sound too weird to be true, the folks at Snopes did the research for the rest of us. And we give them props for being really good at it. Who even knows what’s we’d believe at this point if not for them.

In this case, the Snopes folks did us a public service by reviewing a bunch of Sewdish menus from pizzerias in Stockholm only to find that many really did offer some sort of banana pizza monstrosity…we mean, combination.

Ok, so for the American palate (which is eclectic at best, we’re not claiming to be conniseurs of anything other than pizza here, trust us!), it sounds a little gross. But believe us when we say it actually gets worse.

According to Scopes: “Two such pizzerias were Corella Kungsholmen and Stockholm Pizza, both of which offered the ‘Tropicana’ pizza, described as topped with tomato sauce, cheese, ham, pineapple, curry, and — you guessed it — bananas. In the U.S., the Swedish-style food joint Viking Pizza, which is located in Glendale, California, included its version of ‘Tropicana’ pizza, complete with all of the above toppings and finished off with the addition of shrimp and peanuts.”

Ok, so leave it to the U.S. to take an already sketchy-sounding pizza and somehow make it worse. You took an already questionable Hawaiian pizza and added pizza AND curry? Astounding.

We kid though – it’s never nice to “yuck someone’s yum,” as they say.

How Swedish banana pizza came to be

Snopes did some more research and if it didn’t seem rude, we’d just copy and paste it all because they really went out of their way to add some context. In fact, Sweden really likes their bananas, and “this love affair dates back to the early 20th century when Caribbean-grown bananas were first introduced to the Scandinavian nation, according to historical records.”

Picture it. Sweden, the earth 20th century. Boats comes into the harbor weighed down with tons of bananas. The descendants of apes (aka humans) no longer even know how to enjoy a banana. In fact, they asked the age-old question about every new fruit humans encounter: which parts are edible.

If you think about it this way, maybe it’s no surprise that some confused Swedes eventually put it on a pizza. Sadly, there are no extant written accounts of early attempts to try to figure out what to do with bananas, but we hope there’s a history grad student out there combing Swedish archives to find them. It should add some levity to all the reading about colonial oppression that it probably took to get those bananas out of the Caribbean in the first place.

Of course, there’s a lot to unpack here, historically, about how foods travel around the world, but we’re left with knowing that the banana trade has obvious interruptions during war time. What’s interesting is that as far as Snopes can tell, the banana pizza (with curry) thing started in the 21st century.

We’re going to need a food anthropologist to unpack the rest. The best we can do is tell you it’s not a rumor.