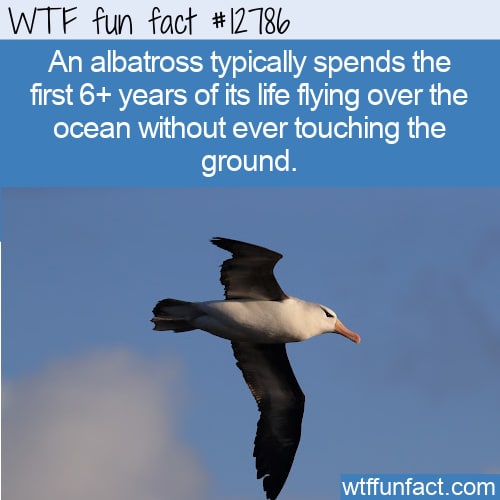 It seems impossible, but albatrosses can go years without ever landing on the ground.

Albatrosses get a bad rap. They’ve long been a metaphor for a psychological burden that’s difficult to escape. This originated not in any real story but in a poem by Samuel Taylor Coleridge called The Rime of the Ancient Mariner published in 1798.

In the poem, an albatross flies out with a ship heading to sea. But the mariner shoots it with a crossbow. Since the albatross is normally a sign of good luck, the action curses him and his crew, who tie a dead albatross around his neck.

But what’s so great about an albatross

Albatrosses are large seabirds whose wingspans can reach over 10 feet. The “great albatrosses,” the wandering and royal albatrosses, have the widest wingspans—ten feet or more—of any living bird.

According to Smithsonian Magazine (cited below): “Albatrosses are masters of soaring flight, able to glide over vast tracts of ocean without flapping their wings. So fully have they adapted to their oceanic existence that they spend the first six or more years of their long lives (which last upwards of 50 years) without ever touching land.”

Who knew an animal could fly, move, or even glide that long?!

Sadly, albatrosses are endangered – in fact, Smithsonian Magazine reports that they’re “one of the most threatened families of birds on earth. All but 2 of the 21 albatross species recognized by the International Union for the Conservation of Nature are described as vulnerable, endangered or, in the case of the Amsterdam and Chatham albatrosses, critically endangered. The scientists hope that the data they gather may save some species from extinction.”

The birds mate for life, but reproduction is a two-step process that requires the right conditions and a long time to produce an egg. Once it hatches, predators abound.