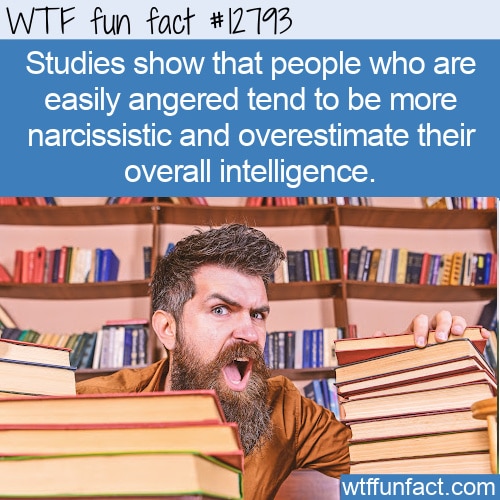 Just because things like swearing are common among intelligent people doesn’t mean that extends to actual anger. In fact, angry people tend to overestimate their intelligence.

Some negative emotions are more common among intelligent people, but anger seems to make folks a bit overconfident. A study showed that those who are quick to anger tend to think they’re smart (and the rest of the world needs to catch up).

According to LiveScience (cited below): “To test this, the researchers surveyed more than 520 undergraduate students attending schools in Warsaw. The students answered survey questions to gauge how easily and how often they get angry. Then, the students took a survey to assess their own intelligence before taking an objective intelligence test.”

People in the study who were quick to anger had a higher opinion of their own cognitive abilities. Those who were more neurotic, on the other hand (who reacted to events with anxiety and distress), tended to see themselves as less intelligent.

In the end, it seems to come down to narcissism. Ill-tempered people tended to be more narcissistic and therefore think they’re smart. Of course, there’s no real, true test of intelligence, so we don’t know if that’s true or not; we just know that they seem to think they’re the real deal when it comes to brains.

The study looked at anger as an overall personality trait, asking people to judge their own general tendencies towards anger. It didn’t try to test how angry they got in the moment.

It’s also important to note that “although the researchers found an association between the two traits, it’s unclear if there’s a cause and effect relationship between anger and overestimating intelligence. More research is needed to explore that link.”

The study was published in the journal Intelligence. – WTF fun facts