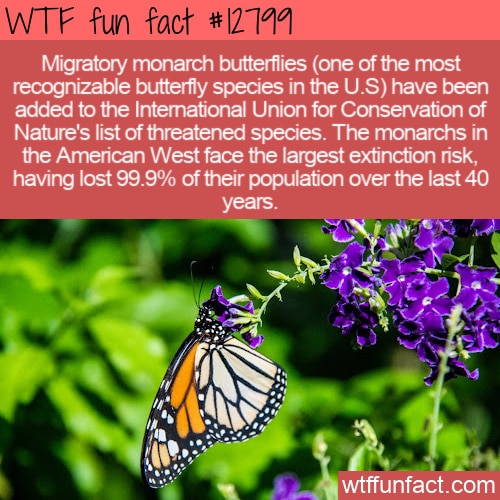 Migratory monarch butterflies (Danaus plexippus plexippus) are a subspecies of monarchs, and while you may have seen them in your backyard growing up if you’re over 40, chances are you’ve seen a lot less of them lately. Migratory monarchs are now endangered and could go extinct.

These iconic American butterflies are black and orange. Like other monarchs, their larvae feed on only one plant – milkweed. Climate change and fires have destroyed much of the milkweed in America and conservationists are encouraging people to plant more.

The butterflies are also threatened by pesticides, herbicides, deforestation, and urban development. In fact, they’re so threatened that a Switzerland-based conservation organization that monitors the status of wildlife – the International Union for Conservation of Nature (IUCN) – has added them to the list of threatened species.

They join around 41,000 other species that could become extinct without intervention.

Migratory monarchs in the American West face the largest extinction risk, having lost 99.9% of their population over the last 40 years, according to Smithsonian Magazine (cited below).

The number of Western migratory monarchs went from ten million in the 1980s to 1,914 by 2021. That may not be enough butterflies to keep the population alive.

But according to Smithsonian Magazine, there’s still hope:

“To help boost monarch numbers, scientists and conservationists recommend planting more milkweed and nectar flowers, maintaining forests and limiting the use of pesticides and herbicides in the butterflies’ range, report CNN’s Madeline Holcombe and Jalen Beckford.

​​“People recognize the monarch,” Anna Walker, an entomologist at the New Mexico BioPark Society who led the assessment, tells the Washington Post’s Dino Grandoni. “People love the monarch. So that gives us an opportunity to do the outreach and get people on board.”