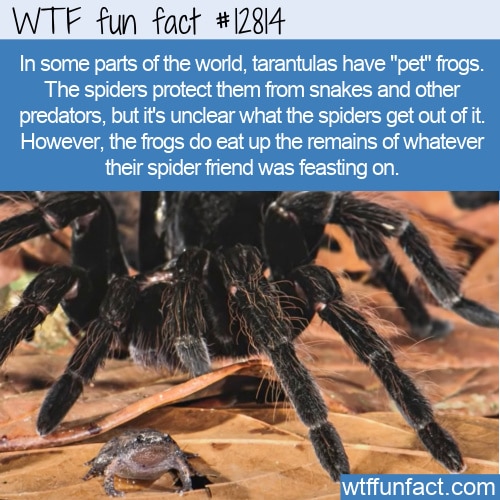 We don’t exactly get the warm fuzzies from tarantulas, but we know there are some spider fans out there who think the leggy creatures get a bad rap. And we’re open to reconsidering some of our terror. Especially when we find out cool things about them – like the tarantula-pet frog connection.

According to a University of Michigan press release, a “team of biologists has documented 15 rare and disturbing predator-prey interactions in the Amazon rainforest including keep-you-up-at-night images of a dinner plate-size tarantula dragging a young opossum across the forest floor.”

Ok. That’s not the endearing part. But they continue…

So, it turns out the circle of life takes a little side trip when it comes to these tiny frogs.

Now, other research shows that tarantulas tend to form communal relationships with frogs that just downright taste bad to them, so they could be why they don’t eat them. But one also has to wonder why they even let them hang around.

Does the tarantula keep frogs as pets or housekeepers?

The nature website Roaring Earth (cited below) gives us some more insight into the frogs:

“Measuring hardly more than half an inch in length, microhylids might seem like a pretty insignificant family of frogs. But they’ve crossed onto scientific radars in a big way. Many of these tiny, narrow-mouthed frogs have been observed in Sri Lanka, Peru, and India living in close proximity to tarantulas.”

Now, when species have commensal symbiosis, that means one creature doesn’t get anything out of the interaction. But it’s possible that this relationship could be described as mutualism instead. In that case, both species would benefit.

And how do the spiders get anything out of this (besides a cute, slimy pet?). Well, some researchers have postulated that “the frogs may eat the small invertebrates attracted to the spider’s prey remains.” So frogs get a bodyguard while spiders get a housekeeper.

Better yet, the small invertebrates that the tarantulas eat are the ones that may target a spider’s eggs. So, frankly, it seems like the spiders get more out of this than the frogs, but tarantulas probably have a hard time finding friends, so maybe it does all even out in the end!

What do you think about the tarantula-pet frog theory? – WTF fun facts