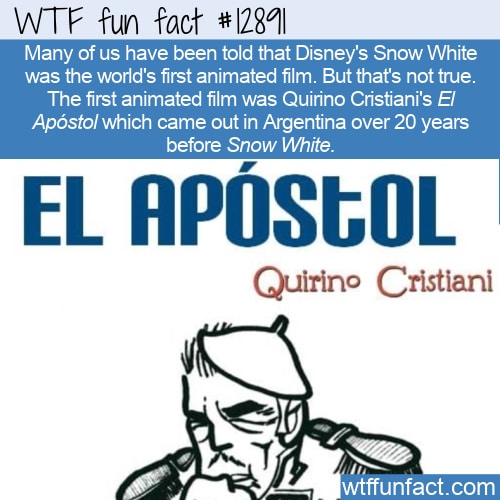 Argentina is home to the first animated movie

The first animated feature film ever made was an Argentinian creation titled El Apóstol. The 1917 movie is now lost to time after being destroyed in a fire in 1926. However, it was around over 20 years before Disney’s Snow White.

The film was directed and produced by two Italian-Argentine immigrants – Quirino Cristiani and Federico Valle.

El Apóstol is no children’s film. In fact, it was a satire of Hipólito Yrigoyen, Argentina’s president in which he dreams of going to Mount Olympus to talk politics with the Greek god Zeus. He ends up using Zeus’ thunderbolt to rid Buenos Aires of corrupt politicians.

The only reason we know about the first animated film is from records about its release in Buenos Aires. It didn’t appear in theaters outside the city.

The creators got very little money or credit for their creation, and now most people assume that Disney’s film 20 years later was the first piece of animated film history.

Unlike Snow White, El Apóstol was a silent black and white film. It ran 70 minutes long.

Cristiani also created a second animated film called Peludópolis before Disney made his first one – and it had audio. That makes Cristiani the creator of the first animated feature film with sound as well.

There is a documentary about Cristiani that finally credits him with his contribution to animated cinema called Quirino Cristiani: The mystery of the first animated movies. Prior to this, he had largely been forgotten in his home country of Argentina as well.