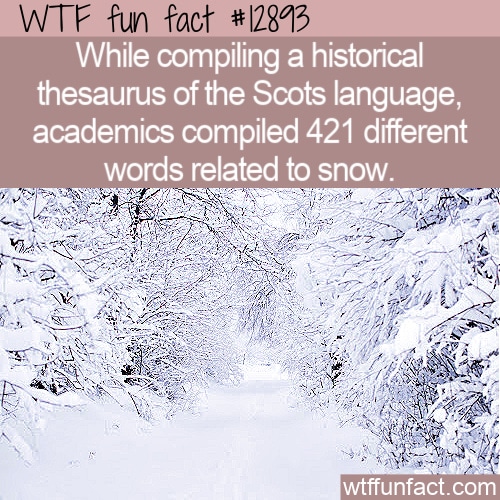 The Scottish are really giving the Inuit a run for their money when it comes to piling up snow-related words. A few years ago, academics reported that they had found over 400 Scottish words for snow – 421, to be exact.

Why are there so many words for snow?

If you live in a snowy place, you know that there are different kinds of snow – wet snow, powdery snow, heavy snow, snow that makes good snowmen, lake effect snow, etc.

After spending years working through historical documents written in the Scots language, it turns out the people of Scotland really got descriptive! Academics at the University of Glasgow organized the Historical Thesaurus of Scots into some interesting categories, including (but not limited to):

What are some Scottish words for snow?

According to the BBC (cited below), the words that will go into the thesaurus include:

But our favorites are “Katty-clean-doors,” which is a child’s name for snow, and “smirr,” which refers to a fine rain, drizzle, or of sleet or snow.”

Of course, we all have lots of words that mean roughly the same thing – there are thesauruses for nearly every language. But we’re still impressed by just how diverse the Scots language is.

The Scots thesaurus also includes a category on sport and believe it or not, the game of marbles has the most words associated with it at 369. – WTF fun facts