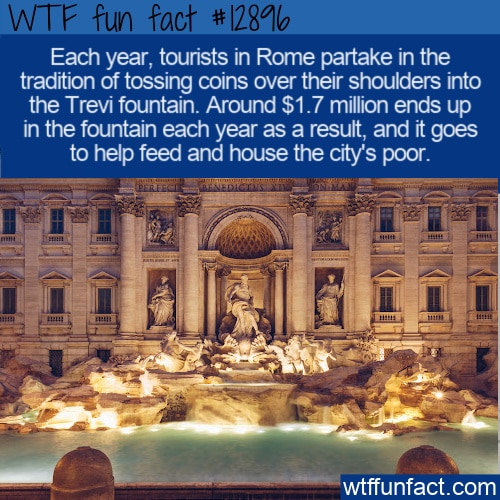 Have you ever wondered what happens to coins in the Trevi Fountain – or any fountain that people toss coins into, for that matter?

They certainly can’t be left in there; otherwise, the fountain in Rome would be buried under a pile of coins by now.

Coins in the Trevi Fountain go to a good cause

Rome’s Trevi Fountain was built in the 18th century and remains a major tourist attraction. The superstition goes that if you toss a coin over your shoulder into the Trevi, you’re destined to return to Rome again someday. And for anyone who has been to the spectacular city, that’s reason enough to part with the extra change.

The tradition is so popular that around $1.7 MILLION is thrown into the fountain every year!

But where do the coins end up?

They go to help the poor by supporting soup kitchens, a homeless center, and other social assistance programs.

The coins in the fountain have recently been the source of some controversy.

According to Smithsonian Magazine (cited below): “Visitors are so keen to engage in the tradition that around $1.7 million in change is thrown into the 18th-century fountain every year. For many years that money has gone to a Catholic charity called Caritas, which aids the poor—and it will continue to do so, Rome’s mayor assured residents after reports circulated that the city council intended to lay claim to the funds. The confusion and controversy stemmed from a leaked document suggesting that the administration of Virginia Raggi, a populist politician who became Rome’s first female mayor in 2016, planned to use the money to bolster city infrastructure, according to ABC News.”

Caritas then published an article accusing the government of taking money away from the city’s poor – and that did not go over well.

While it doesn’t sound like the worst idea to let some of the money go towards maintaining the city that tourists love (and trample), the money wasn’t guaranteed to be used that specifically if it went to the city’s populist government.

Virginia Raggi, the mayor at the time of the controversy in 2016, backtracked on her plans after she was accused of diverting money from the poor. While she asked the city council to approve her plan, she later (and inexplicably) said there were no plans to ever divert the money.

So it looks like the coins will continue to go to charity. – WTF fun facts