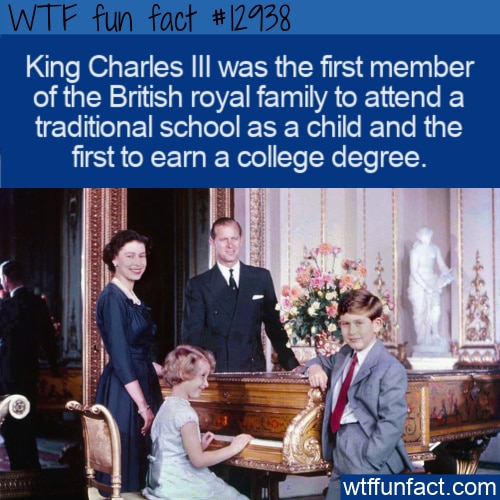 In the British Royal family, there’s always been intense media scrutiny. However, despite safety and other concerns, the man we now know as King Charles III was the first British to go to school.

Of course, we mean traditional school. All of the royals in the recent past were educated – they were simply tutored at home.

Born in Buckingham Palace on on November 14, 1948, Prince Charles Philip Arthur George would wait quite some time to ascend the throne – in fact, he was the longest king-in-waiting in British history.

Charles was just 3 years old when his mother Princess Elizabeth became Queen Elizabeth II. At the time she gave him the title Duke of Cornwall, and at age 20 he also became the Prince of Wales.

After being tutored at home by his governess until age 8, Charles was then sent to Hill House School in west London, then to Cheam (a preparatory school in Hampshire), followed by Gordonstoun, a Scottish boarding school that had been attended by his father Philip and where he similarly became Head Boy.

Gordonstoun was known for its character-building outdoor activities, but rumors are that Charles had a rather unhappy education there after being bullied. Later, he said the experience taught him a lot about his “abilities and disabilities.”

Prince Charles also attended the Timbertop campus of Geelong Grammar School in Victoria, Australia in 1966, which he called some of the best years of his young life.

After graduating, King Charles III also became the first British Royal to ever graduate from college (an institution that had already been around for centuries, so it’s not necessarily an unlikely feat).

He graduated from Trinity College at Cambridge University in 1970 with a degree in History before joining the Royal Air Force to become a pilot and the Royal Navy to fly helicopters. He spent seven years in the military, eventually earning the rank of commander on the HMC Bronington (a minesweeper) in 1976.

Source: “Britain has a new monarch: What to know about King Charles III” — The Washington Post