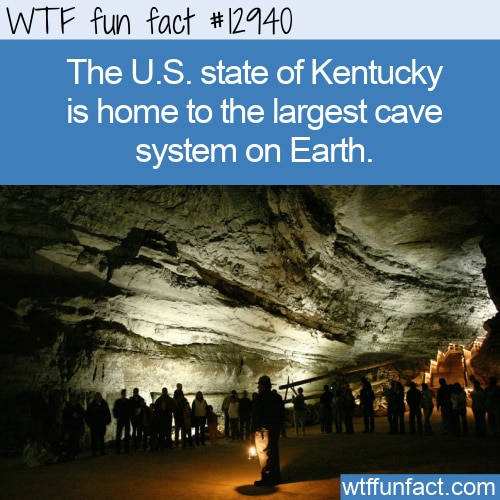 Caves are pretty cool. And if you’ve ever been in one (especially on a tour during which a guide can explain to you all the amazing things you’re seeing), you know that they’re complex as well as a bit creepy and beautiful. That said, we would imagine the world’s largest cave systems to be somewhere in Europe or Asia. But nope – the Kentucky cave system is the largest in the world.

Kentucky seems unlikely mostly because it’s not all that large. It’s only the 37th largest U.S. state. Nevertheless, it’s all about what lies beneath.

There’s a reason the cave system is known as Mammoth Cave. It is comprised of over 400 miles of subterranean passageways. To give you some perspective, the second largest cave system – Sistema Sac Actun – is in Mexico, and it’s only half the size of Kentucky’s cave system.

According to The Culture Trip (cited below): “Mammoth Cave…could fit the Grand Canyon inside it and have room to spare.”

The site also notes that “Surveyors discovered new rooms and passages throughout the 20th century, linking caves together to become the largest of its kind. Still today, new sections are being mapped, and Mammoth Cave rangers estimate the cave could contain upwards of 1,000 total miles (1,609.3km). While only a sliver of that – roughly 14mi (22.5km) – is open for tours, the park provides an awe-inspiring glimpse into a realm of mystery and intrigue.”

Between the caves and the bourbon, Kentucky is looking like a pretty great vacation destination right now!

Of course, researchers and treasure hunters weren’t the first to discover the cave system. Native Americans knew about it 4,000 years ago and left tools and petroglyphs (aka rock carvings) throughout the cave system. These have been preserved because of the steady temperature and humidity.

“These are also prime conditions for preserving human remains, some of which have been found buried in the caves or trapped under rock formations,” notes Culture Trip. That’s one of the many reasons you’re not going to be allowed down there all on your own.

There’s a lot that happened underground in Kentucky, for example during the Revolutionary War. But today Mammoth Cave is a national park. That’s a good thing since it helps us keep it safe and preserved from whatever humans might decide to do down there. In 1981, it was designated a UNESCO World Heritage site, and in 1990 an International Biosphere Reserve.

Still, tours of parts of the Kentucky cave system have been going on since 1816, and you can sign up for one today to see stalactites, stalagmites, columns, and other amazing shapes formed by all sorts of geological processes. — WTF fun facts

Source: “Kentucky Is Home to the World’s Largest Cave System” — The Culture Trip