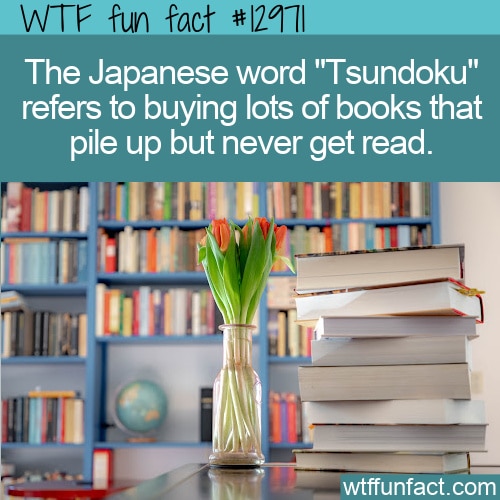 Do you love books? Do you buy them to display in your home? Plenty of us do! But do you actually read them all? Probably not. In this case, you may be interested to know there’s a word for that – at least a Japanese one. Tsundoku is a person who engages in collecting a lot of unread books.

But it’s not an insult. Book lovers just really like to be around books!

The BBC (cited below) interviewed Prof Andrew Gerstle from the University of London about the phenomenon and the roots of the word in 2018.

“He explained to the BBC the term might be older than you think – it can be found in print as early as 1879, meaning it was likely in use before that. The word ‘doku’ can be used as a verb to mean ‘reading.; According to Prof Gerstle, the ‘tsun’ in ‘tsundoku’ originates in ‘tsumu’ – a word meaning ‘to pile up.'” (Like a tsunami of books?!)

The literal meaning of “tsundoku” is buying reading material and piling it up.

The first use of the phrase has been traced to a piece of satirical writing by writer Mori Senzo from 1870, who described a teacher who had lots of books he didn’t read.

Just because there’s a word for it doesn’t mean it’s problematic behavior. Books can be great conversation starters even when they’re sitting on shelves. They even serve as great decor.

Of course, spending money on something that goes unused can spell trouble for some people.

If you’re interested in “curing” yourself of this habit, you can always limit yourself to books that you’re immediately interested in reading, limit the amount of time a book sits in a pile before you read it or give it away, or give yourself a specific number of books you’re allowed to buy in a given period of time. And if you simply don’t have the space, you can always donate your books to someone else with tsundoku. — WTF fun facts

Source: “Tsundoku: The art of buying books and never reading them” — BBC