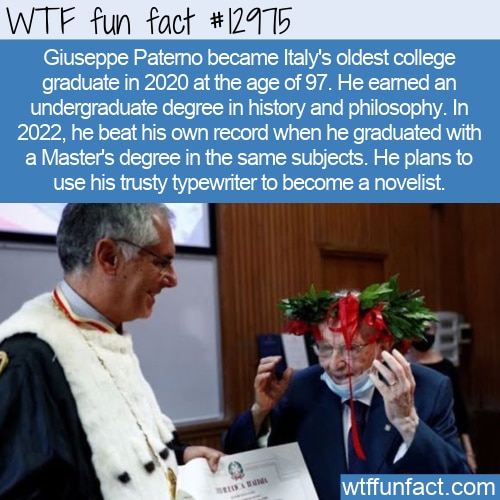 In 2020, 96-year-old Giuseppe Paterno became Italy’s oldest college graduate. In 2022, at age 98, he did it again by getting a Master’s degree in history and philosophy from the University of Palermo.

According to Reuters (cited below), Paterno was born in 1923 and “grew up in a poor family in Sicily and despite his love of books and studying, he wasn’t able to go to university as a young man…Instead, he served in the navy during World War Two from the age of 20 and went on to be a railway worker.” He is the youngest of seven children.

He enrolled in the University of Palermo in 2017 to get an undergraduate degree in philosophy and history, which he achieved in 2020.

In an interview with The Guardian in 2020, Palermo said “I’ve finally realized my dream…Being able to study has always been my greatest aspiration, but my family wasn’t able to pay for my education. We were a large family and very poor.”

About his college goals, he told the paper: “I came out unscathed from the war and took a job working for the state railway service. I wasn’t enthused about my job, but I knew I had to do it because by that time I was married and had a family to support. At the same time, I had an overwhelming desire to dive into books and read, study and learn.”

Paterno did try to go back to school and take evening classes at age 31 but wasn’t able to balance family life, work, and college at the time.

It wasn’t until his 90s that he was able to really make time to study.

In 2020, he said: “I’d wake up at seven to study. I’d use an old typewriter to complete my assignments. I’d rest in the afternoon and in the evening I’d study until midnight. My neighbours used to ask, ‘why all this trouble at your age?’ But they couldn’t understand the importance of reaching a dream, regardless of my age.”

However, COVID nearly thwarted his efforts as he was forced to enroll in online classes to finish his undergraduate degree. But he made it, saying: “It’s one of the happiest days of my entire life. I only wish my wife were here to see me. She died 14 years ago.”

That’s when he made plans to get his Master’s degree, which he received in June of 2022.