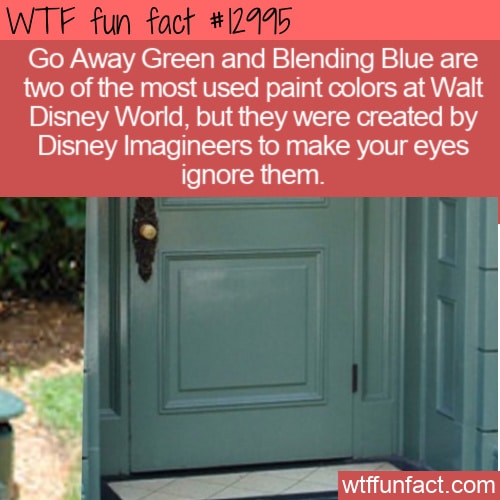 Why would Disney paint colors be so bland?

Go Away Green and Blending Blue are two of the most used paint colors at the Walt Disney World Resort. They were blended by Disney Imagineers to be so unspectacular that our eyes just pass right over them and never focus on what they’re covering (like doors no guest is meant to enter).

Of course, green and grey/blue have long been used in camouflage as well, but that’s technically to get uniforms to blend into the background.

According to the blog Inside the Magic (cited below), Go-away green is “A very bland shade of green you see a lot of in the park but don’t really think anything about.  It was created with the idea that the common eye would glaze right over it. Unless you’re looking for it, it is all too easy to just glance right past anything painted in this all-too-neutral color. It is used in a lot of places like fences, buildings, the wall around the park… And most famously, the door to the exclusive Club 33.“

These Disney paint colors aren’t exactly available to the rest of us, but if you’d really like to make your house not stand out, try Aganthus Green by Benjamin Moore.

House Beautiful Magazine says of Go-Away Green that “The color itself doesn’t initially appear to be all that magical (that’s precisely why it’s so great)—it’s really just a barely-there cross between pale gray and green. The unassuming shade blends well with many landscapes, so it’s often used on utility structures, back doors, and other less-than-majestic sights that Disney doesn’t want guests to notice. For instance, bloggers have spotted it disguising a not-so-pretty building behind a restaurant, slathered on a shadowy, nearly blank corner, and even on garbage cans.” — WTF fun facts