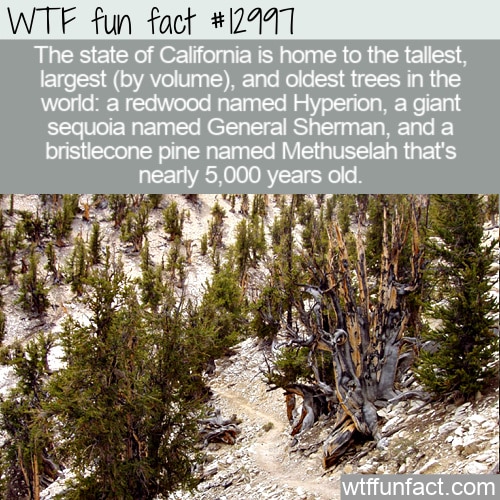 We’re not sure what kind of tree we expected to be the oldest in the world. Maybe a redwood or an olive tree, perhaps? But, in fact, a bristlecone pine is the oldest tree in the world (at least the oldest to be confirmed). Its name is Methuselah, and it’s likely over 4,800 years old.

Like the tallest and largest (by volume) trees in the world, the oldest is also located in the U.S. state of California. Luckily, it’s off the beaten path, which is no doubt one of the reason’s it’s managed to survive this long.

Researchers put Methuselah at an amazing 4,854-year-old. Its species is the Great Basin bristlecone pine (Pinus longaeva), and it’s named after the biblical elder Methuselah, who was said to be 969 years old and whose name is now often used for things of advanced age.

The tree Methuselah is located in the White Mountains in eastern California. It lies in “Methuselah Grove” of the Ancient Bristlecone Pine Forest tucked inside Inyo National Forest.

And while its precise location has remained a secret for many years, it (along with the location of other majestic California trees under protection) has been leaked to the public, putting it in danger.

What is the oldest tree in the world older than?

That a bristlecone pine is the oldest tree in the world is already remarkable. But the fact that Methuselah is older than the Egyptian pyramids and is thousands of years older than written language is pretty mind-blowing.

Of course, there are constant challenges from people claiming to find older trees. In fact, there may be another tree nearby that’s older (some claim there is). But right now, Methuselah is the confirmed “winner” (if that’s considered a win).

Even if another tree overtakes it, it hardly matters. In fact, that might only serve to protect the tree that’s older than most civilizations that even ancient historians study (since it predates anything they could have written about themselves). You’d have to go back to cave paintings to find older ones.

The bristlecone pine is the oldest tree in the world

According to the NYT (cited below), “For decades, giant sequoias were believed to be the world’s oldest trees…” In fact, California is home to the tallest, largest (by volume), and oldest trees in the world: a redwood named Hyperion, a giant sequoia named General Sherman, and Methuselah.

Simply googling it will give you a better photo than we have permission to share. — WTF fun facts

Source: “In California, Where Trees Are King, One Hardy Pine Has Survived for 4,800 Years” — The New York Times