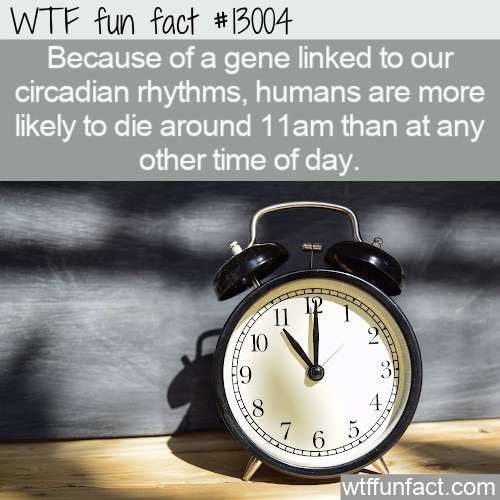 “Fun” fact: Because of a gene linked to our circadian rhythms, humans are more likely to die around 11am than at any other time of day.

In 2012, a study published in the Annals of Neurology reported on a gene variant that affects our circadian rhythms. And that variant, it seems, could also predict the time of day you will die. And that time is around 11am.

According to a write-up in The Atlantic (cited below), the study’s authors “realized through their research that there seems to be one DNA sequence that determines, essentially, how each of us relates to time itself. And data analysis — poring through 15 years’ worth of sleep and death patterns collected from subjects in an unrelated sleep study — helped them to make the realization.”

A lot of this work has to do with the ways in which we are no longer beholden to a strict social schedule as we age.

Our external environment affects our inner circadian “clocks,” which regulate our bodies’ functions This includes elements like work schedules and daylight exposure. But there’s also a genetic component to the time of day we’re most active and alert.

According to another Atlantic piece on the research that studied the phenomenon: “Researchers at Beth Israel Deaconess Medical Center in Boston borrowed data that had been collected 15 years ago from a sleep study at Rush University in Chicago…First, its subjects had worn a device, called an actigraph, that provided detailed information about their sleep-wake patterns. Second, the subjects were all over the age of 65 when the study was originally done. So by the time the Harvard researchers got to them, many had passed away. They had all also agreed to donate their brains to science. Because of this, the researchers knew their precise times of death. Finally, in the course of the many physical and psychological evaluations undergone by the subjects, they had also had their DNA sequenced.”

The researchers compared data from over 500 participants, looking at genetics and the time of death. They found a piece of DNA that was linked to sleeping and waking hours.

People with a more common gene variant tended to die in the late morning, around 11am.

But this doesn’t mean 11am is a more dangerous time of day. The study participants had largely died of natural causes. So the issue is that their circadian rhythms affected their bodies in a way that late morning was the most common time for them to expire. — WTF fun facts