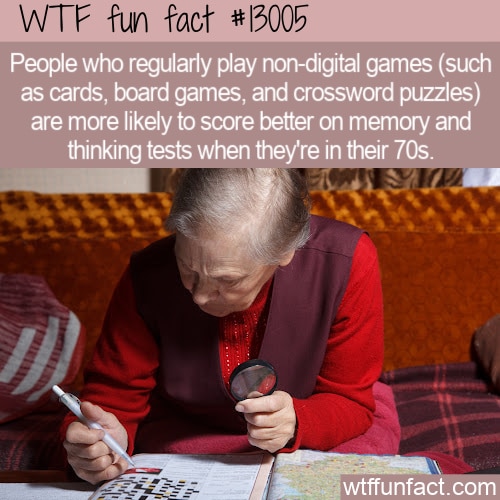 Fun fact: People who regularly play non-digital games (such as cards and board games) are more likely to score better on memory and thinking tests when they’re in their 70s.
If you’re interested in maintaining your mental acuity over time, board games for the brain may just help you out!

If you want to stay sharp in your 70s, games are a great way to exercise your brain. But digital games (such as video games and games on your phone) just won’t cut it. The link between mental acuity in later life and games seems to apply only to physical games like board games and playing cards.

Researchers at the University of Edinburgh “tested more than 1000 people aged 70 for memory, problem solving, thinking speed and general thinking ability,” according to Science Daily (cited below). “Those who regularly played non-digital games scored better on memory and thinking tests in their 70s, the research found.”

The power of board games for the brain

Interestingly, the study also found that “People who increased game playing during their 70s were more likely to maintain certain thinking skills as they grew older.”

Scientists discovered the connection after testing their subjects every three years, until they reached age 79. They compared test results to how often people reported playing games like cards, chess, bingo, or crossword puzzles.

The team also factored in the scores from the subject’s intelligence tests when they were 11 years old and considered factors like lifestyle, economic status, and activity levels so that they could be reasonably sure that the games were the underlying factor for better memory test scores. (The participants were part of a group called the Lothian Birth Cohort 1936. They were all born in 1936 and have been tracked in a variety of ways throughout their lives.)

They found that: “People who increased game playing in later years were found to have experienced less decline in thinking skills in their seventies — particularly in memory function and thinking speed.”

Caroline Abrahams, Charity Director at Age UK, said of the study: “Even though some people’s thinking skills can decline as we get older, this research is further evidence that it doesn’t have to be inevitable. The connection between playing board games and other non-digital games later in life and sharper thinking and memory skills adds to what we know about steps we can take to protect our cognitive health, including not drinking excess alcohol, being active and eating a healthy diet.” — WTF fun facts