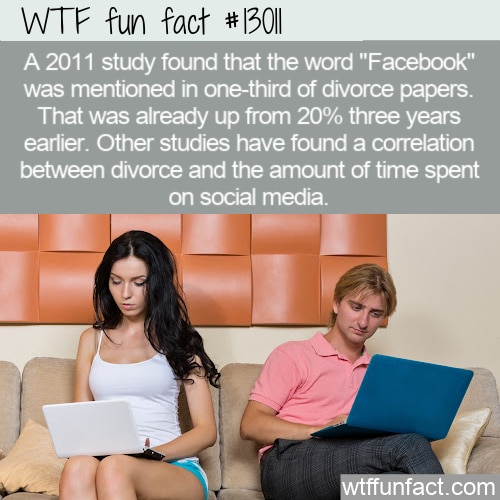 What’s the connection between Facebook and divorce? Well, one clue comes from a study published back in 2013 that found an astonishing 1/3 of divorce papers included a reference to the social media platform.

We’d be interested to know where this study stands now and if anyone looked more deeply into the results. What we do know is that in 2011, 1/3rd of all divorce filings contained the word “Facebook,” according to Divorce Online. This was up from 20% just three years earlier. ABC News (cited below) also pointed out that “more than 80 percent of U.S. divorce attorneys say social networking in divorce proceedings is on the rise, according to the American Academy of Matrimonial Lawyers.”

Lawyers have also seen an increase in the number of times Facebook has been used to prove infidelity during divorce cases as well as in child custody hearings.

ABC News also reported that “Despite the increase, the top Facebook mentions were the same: inappropriate messages to “friends” of the opposite sex, and cruel posts or comments between separated spouses. Sometimes, Facebook friends would tattle to one partner in a relationship about bad behavior by the other.”

A 2013 study in the journal Cyberpsychology, Behavior, and Social Networking also showed that Facebook was playing an important role in the end of relationships.

While Facebook might have helped some of us forge new relationships, it may not be the best use of our time once we’re in them. In fact, it may be damaging to our romantic relationships, according to Russell Clayton who performed the research and found that “people who use Facebook excessively are far more likely to experience Facebook-related conflict with their romantic partners, which then may cause negative relationship outcomes including emotional and physical cheating, breakup and divorce,” according to a press release.”

When it came to couples in a relationship for three years or less, Facebook proved to be a particularly large problem.

“Previous research has shown that the more a person in a romantic relationship uses Facebook, the more likely they are to monitor their partner’s Facebook activity more stringently, which can lead to feelings of jealousy,” Clayton said. “Facebook-induced jealousy may lead to arguments concerning past partners. Also, our study found that excessive Facebook users are more likely to connect or reconnect with other Facebook users, including previous partners, which may lead to emotional and physical cheating.”

If you want your relationship to last, you may want to consider being more mindful about how and how often you use social media. — WTF fun facts