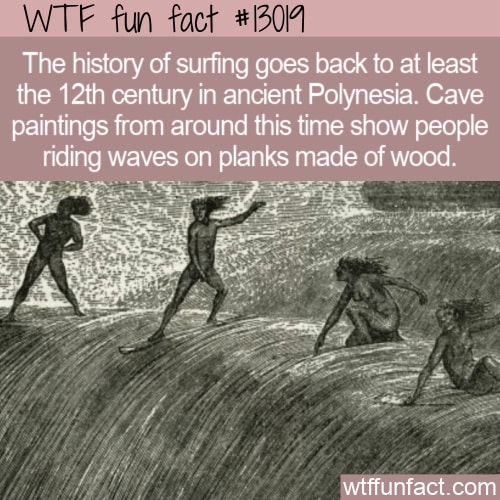 When was surfing invented? Probably 700 years ago, at least. The Polynesians invented surfing – that is, standing on a board while riding a wave – long before contact with European colonists. Only later did it come to Hawaii.

Surfing goes back to at least the 12th century. Polynesians made the first surfboards from long pieces of wood. They likely used the activity as a means of transportation between the islands of Polynesia. But it was also a sacred activity and a way to train warriors.

Today, we typically think of Hawaii as the birthplace of surfing, but it likely originated on other Polynesian islands. The Polynesians brought it to Hawaii later.

According to the surf blog Errant Waves (cited below):

“Surfing was a central part of the power relationship on these islands. For example, the tribe with the highest rank had the best beaches and the best ‘boards.’ In addition, the chiefs of the tribes were the best surfers in the clan, who therefore were allowed to have the best boards made of the best wood. The ‘normal’ people were not allowed on the beaches of the tribal chiefs. They had to surf on their own, lesser beaches. Surfing was therefore literally a royal sport on these islands.”

While cave paintings tell us how old surfing may be, the earliest descriptions are in the notes of European colonists.

Colonists’ describe the invention of surfing

The first description of surfing on the island of Hawaii comes from the botanist onboard Captain Cook’s HMS Resolution. Joseph Banks wrote:

“(…) the shore was covered with pebbles and large stones; yet, in the midst of these breakers, were ten or twelve Indians swimming for their amusement: whenever a surf broke near them, they dived under it, and, to all appearance with infinite facility, rose again on the other side...At this wonderful scene we stood gazing for more than half an hour, during which time none of the swimmers attempted to come on shore, but seemed to enjoy their sport in the highest degree; we then proceeded in our journey, and late in the evening got back to the fort.”

Less than a decade later, in 1777, Dr. William Anderson wrote another description. In 1777, he published these words about surfers in Tahiti:

“I could not help concluding that this man felt the most supreme pleasure while he was driven on so fast and so smoothly by the sea; especially as, though the tents and ships were so near, he did not seem in the least to envy or even to take any notice of the crowds of his countrymen collected to view them as objects which were rare and curious. During my stay, two or three of the natives came up, who seemed to share his felicity, and always called out when there was an appearance of a favorable swell, as he sometimes missed it by his back being turned, and looking about for it. By then I understood that this exercise… was frequent among them; and they have probably more amusements of this sort which afford them at least as much pleasure as skating, which is the only of ours with whose effects I could compare it.” — WTF fun facts