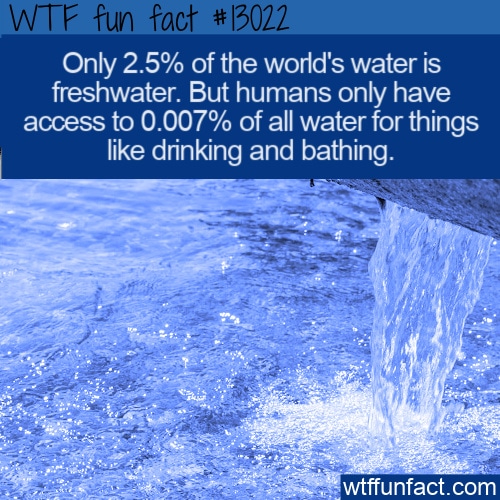 Seventy-one percent of the Earth is covered in water, but that doesn’t mean we can use it all. But what percent of the world’s water is fresh (and therefore useable for humans to ingest)? Just 2.55 – and much of that is trapped in glaciers. Only 0.007% is available to us for use. The rest is saline and ocean-based. Interestingly, that’s roughly the same amount of freshwater that has always existed on Earth.

Water is a valuable resource. If you’ve ever been without fresh water, even for a short time, you probably know exactly how panic-inducing a lack of fresh water can be. But for many people, fresh water is something we’ve always had and never really questioned. Those are the lucky minority.

It’s a bit startling to realize that the Earth’s freshwater resources have been around for hundreds of millions of years. What we drink has been recycled many, many times, whether it’s via the atmosphere or through our drinking water cups (and we’ll leave you to figure out how that works and then appreciate your local water treatment facility on your own).

Because we have very limited means of creating potable water out of saltwater through desalinization technology, it’s very hard to make enough new freshwater to sustain more humans. And that’s bad news when you think about how much water goes into things we enjoy – NatGeo says “the average hamburger takes 2,400 liters, or 630 gallons, of water to produce.

An increasingly large human population means we will need more water for hygiene, cooking, and drinking.

According to National Geographic (cited below): “Water scarcity is an abstract concept to many and a stark reality for others. It is the result of myriad environmental, political, economic, and social forces.” It has always been this way – people have fought wars over access to freshwater supplies for thousands of years.

“Due to geography, climate, engineering, regulation, and competition for resources, some regions seem relatively flush with freshwater, while others face drought and debilitating pollution. In much of the developing world, clean water is either hard to come by or a commodity that requires laborious work or significant currency to obtain,” they note.