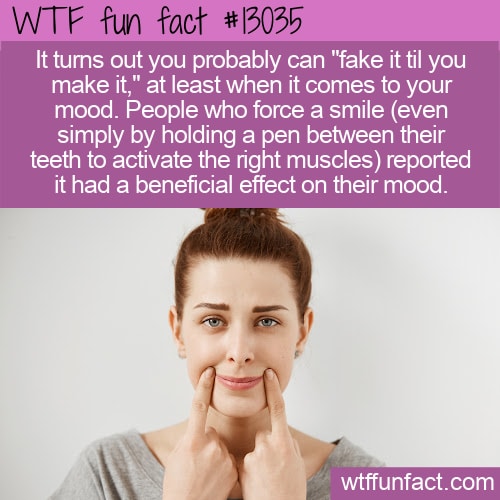 The last thing any unhappy person wants to hear is “smile,” “cheer up,” or “can’t you just try to be happy?” The answer to all of those requests is usually “no.” But once those people leave the room, you may just want to try it out next time you’re grumpy. It turns out there’s some truth to the whole “fake it til you make it” thing.

Smile though your heart is aching

It’s hard, perhaps impossible even, to smile all the time. But if you’re in a bad mood and you’d rather not be (and let’s face it, sometimes we want to wallow), your physiology can sometimes affect your mood.

In other words, smiling may help you change your emotional trajectory.

According to Psychology Today (cited below):

Fake it til you make it

This is based on real research, not just a web column. In fact, it’s based on a review of over 100 research studies that showed a connection between people faking a mood and then recording how they felt afterward. Researchers showed that to some small extent “an individual’s experience of emotion is influenced by feedback from their facial movements.” It’s called the facial feedback hypothesis.

This tracks with another principle called the Hebbian theory, or Hebb’s Law, stating that “neurons that fire together wire together.” (However, Hebb’s Law has more to do with learning.)

The point is that if you can muster a smile and even a joyful tone, you can trick your brain into releasing some of those happy chemicals. (There’s also the possibility that the people around you will be happier. And this tends to make situations more pleasant too.)

We’re not saying you should force a smile all the time. But if you’re looking to lift your mood, the answer lies inside you.

The facial feedback hypothesis is partly based on the work of Charles Darwin, who noted that facial expressions can affect a person’s emotional experience. And since Darwin was deeply depressed for much of his life, we imagine he tried it for himself on more than one occasion.

Researchers have tried to see if smiling helps improve mood without even asking a person to fake a grin. They just had subjects put a pe between their teeth to make the right muscles move. Moods lifted. A pen between the lips tended to lessen the cheer, however, since that activated frowning muscles.

And the effect doesn’t appear to be limited to smiling either – posture can help. Unslumping shoulders, standing up straight, and holding your head up all help. These actions can make it easier to engage with people in a positive way, improving your mood. It also helps with confidence (and first impressions).

Some version of the “fake it til you make it” adage has been around for a long time. For example, philosopher William James once wrote: “If you want a quality, act as if you already have it.”

Of course, that doesn’t make it ok to tell someone to smile. — WTF fun facts

Source: “How “Fake It ‘Till You Make It” Really Is a Thing” — Psychology Today