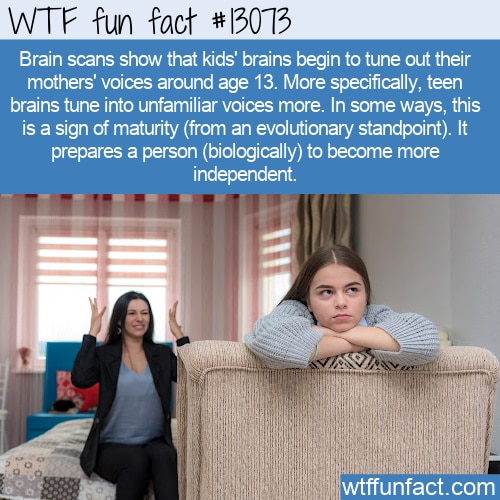 Got teenagers? Do you feel like they listen to you? If not, it’s likely because our brains rewire themselves to tune out our parents in our teen years. In fact, Stanford University research shows that teens tune out their mothers’ voices around the age of 13.

How teens tune out

More specifically, according to Stanford (cited below), “Around age 13, kids’ brains no longer find their moms’ voices uniquely rewarding, and they tune into unfamiliar voices more.”

Of course, this doesn’t give a person a free pass not to listen to their mom. But it does seem to be an evolutionary mechanism. Our brains are preparing to separate us from our parents in the long run – something we all have to do in order to become successful adults.

Clinical associate professor of psychiatry and behavioral sciences Daniel Abrams, Ph.D. told Stanford News: “Just as an infant knows to tune into her mother’s voice, an adolescent knows to tune into novel voices. As a teen, you don’t know you’re doing this. You’re just being you: You’ve got your friends and new companions and you want to spend time with them. Your mind is increasingly sensitive to and attracted to these unfamiliar voices.”

All of these changes have to do with the reward centers of the brain. The brain prioritizes stimuli (like certain voices) that activate the reward centers. Unfamiliar voices start to stimulate the brain more around age 13. So while they are still capable of listening to their moms, teens simply don’t get the same level of stimulation and comfort from her familiar voice as they did as children.

In most ways, this is a good thing. It’s a sign that their brain is maturing and getting ready to engage with the world independently from their parents. This allows them to become “socially adept outside their families” – something required for any adult.

How things change over time

Under the age of 12, kids can identify their mom’s voice with great precision, and it tends to activate reward centers and emotion-processing regions of the brain. But if you’re a mom, take heart. Your voice is what sets your child’s brain up for their social and emotional future.

According to co-author Percy Mistry, Ph.D., “The mother’s voice is the sound source that teaches young kids all about the social-emotional world and language development.”

But things change as we grow up. And the switch towards privileging unfamiliar voices between ages 13 and 14 happens at the same time in all genders. — WTF fun facts