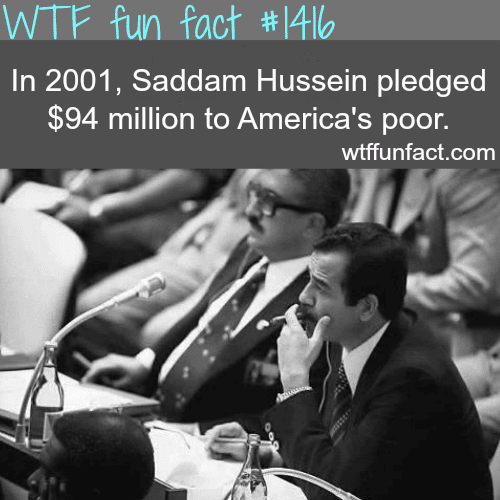 source at the bottom  of this post. (but read this)

all i want to say is, the history of this man is very messed up, He was executed for killing 5,000 Iraqis  but then there are protests now in iraq saying that they wish for his regime to come back. We hate him, but we don’t Know why, maybe because of all the bad things that the media portray him. We went to war to “free the iraqi people”, but really? did they need our “Democracy”. 65% of iraq’s population say they favor his rule over this “fake democracy” in Iraq. Ever wondered why?

3. 10,000 college professors fled from iraq when “Democracy” came in 2003,Now stop and think for a second, why do professors and educated  people don’t like our “FREEDOM”?

4. Iraq’s currency was expensive  in other ways, If you have 1 dinar in 1975, you will get 3 dollars for that Dinar (iraq currency name)

5. Some say that he was linked to Al Qaeda, but that was never confirmed, but it was used as propaganda to attack Iraq… In fact, the U.S. has more links to al qaeda than him.