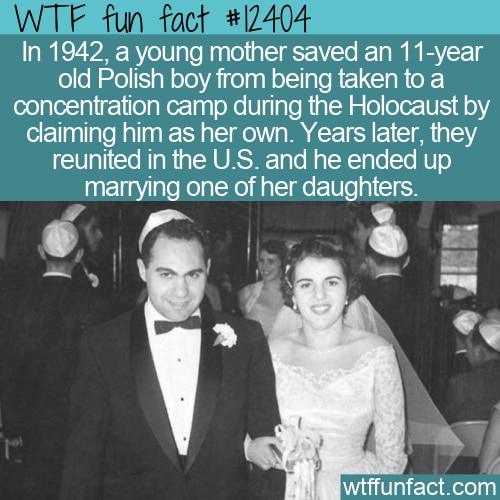 On April 30, 1942, an 11-year-old boy named Philip Lazowski stepped outside his family’s hiding place in the Jewish ghetto of Zhetel, Poland. When the Nazis spotted him, they took him to the town square, where they sorted people into groups of those who would live and those who would die.

Among those chosen to live were doctors, tailors, nurses, etc. He saw all of the young and elderly people being shuttled into the group that would be shot. 1000 Jews were slaughtered that day.

Lazowski spotted a woman named Miriam Rabinowitz, who has a nursing certificate and two little girls by her side.

“I went over to her, and I asked her, ‘Would you be kind enough to take me as your son?’ ” he recalled, according to WBUR. “She said, ‘If they let me live with two children, maybe they’ll let me live with three. Hold on to my dress.”

All four survived that day, having no idea they would meet again in the U.S.

While attending a wedding, Lazowski struck up a conversation with someone who knew Ruth and her daughters and the story of them saving a young boy in 1942.

“Sitting at the table, I said, ‘I come from the town of Bielica,'” Lazowski said. “She says, ‘You know, a girlfriend told me a story, they saved a boy from Bielica. And we don’t know if he’s alive.'”

Realizing he was that boy, he tracked down the nurse, Mirian Rabinowitz. It was then that he formally met her daughter Ruth, who he later married in 1955.

Source: A family helped a Holocaust survivor escape death. Then they became his real family — WBUR