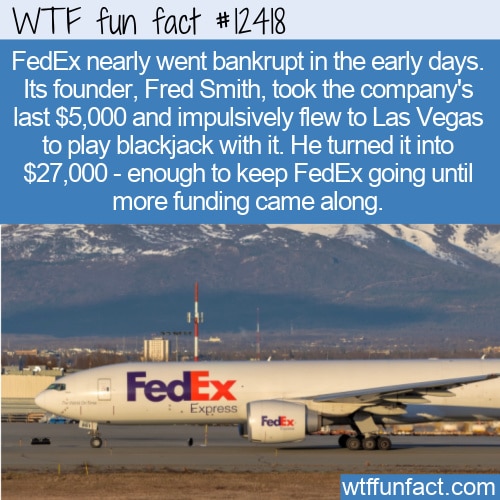 Federal Express (now known as FedEx) was the first overnight delivery company. It was founded by Frederick Smith and based on an economics paper he wrote as a student at Yale. The term paper was written in the 1960s, but it argued that the world needed a way to deliver packages overnight in the new, computerized age of information. As Smith recalls, he got a “C” because his professor found the idea implausible.

But what’s even more implausible-yet-true is how FedEx survived in its early days while running a fleet of airplanes as gas prices skyrocketed. Smith had initially funded the company with his $4 million inheritance along with $80 million in loans and equity investments (in other words, it was no small start-up in his parents’ garage). However, those eight planes covering 35 cities drove the company into debt.

Smith tried to raise more funding but failed. The company’s funds reached a paltry $5,000 – not even enough to gas the planes and pay the pilots. Faced with potential ruin, Fred Smith made a questionable decision. Without consulting his partners, he took the company’s remaining money, hopped on a plane to Las Vegas, and headed to a casino to play blackjack.

When he returned to headquarters the next week, he had turned the $5,000 into $27,000. That wasn’t enough to keep things afloat for long, but they could stay open another week and had new motivation to keep trying for another round of funding.

In the book “Changing How the World Does Business: FedEx’s Incredible Journey to Success” former FedEx senior vice president of operations Roger Frock recalled his reaction to Smith’s antics: “I said, ‘You mean you took our last $5,000 — how could you do that? [Smith] shrugged his shoulders and said, ‘What difference does it make? Without the funds for the fuel companies, we couldn’t have flown anyway.'”

Soon after, FedEx got another injection of funding to the tune of $11 million, which helped stabilize the company and allow Smith to start a direct mail advertising campaign. The company took years to become profitable, but in 1976 it brought in $3.6 million. After going public a few years later, the company became a long-term success.

Of course, we can’t help but wonder about the professor who gave Smith a “C” on his economics paper at Yale. Was he right in thinking that it wasn’t really a viable business idea (after all, it took some serious luck to make it happen)? – WTF Fun Facts

Source: “The Founder Of FedEx Saved The Company From Bankruptcy With His Blackjack Winnings” — Business Insider