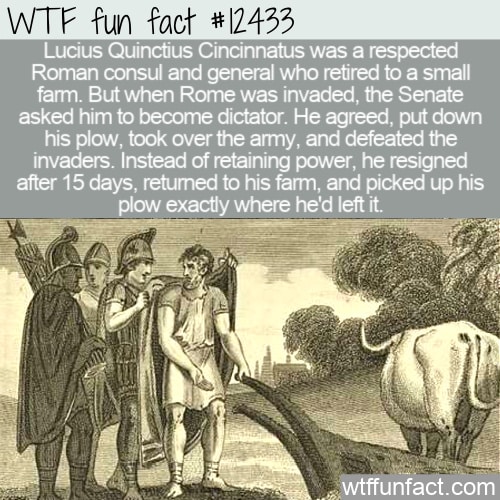 The city of Cincinnati, Ohio, is named after the Roman statesman and general Lucius Quinctius Cincinnatus.

After serving as Roman consul (the highest elected position) in the 5th century BCE, he retired to his farm.

In 458 BCE, the Aequi people broke a treaty with Rome and launched an invasion in the city of Tusculum. Rome raised two armies to fight them off, but the consuls at the time were unable to get an advantage over the invaders. The Roman army was surrounded.

In times like this, the Roman Senate was entitled to appoint a “dictator” for a 6-month term. This man would have ultimate power over political affairs and the armies. Remembering that Cincinnatus was a great general and consul, a group of senators traveled to his farm and asked him to become dictator until the crisis was over.

As the historian Livy describes it, Cincinnatus called for his toga (the proper attire to meet with Roman leadership), wiped off the sweat and dirt, put down his plow, and finally agreed to the request – but it took some convincing. He eventually agreed for the good of Rome.

Cincinnatus took over the army and led to Romans to a swift victory. He returned to the city as a hero and could have lived a life of luxury and power. However, immediately afterward, he relinquished the title of dictator, returned to his farm, and picked up his plow in the very same place he left it.

Cincinnatus is held up as a paragon of civic virtue. US President George Washington, who also could have maintained absolute power but put it aside in favor of the new Constitution, is referred to as The American Cincinnatus. – WTF fun facts

Source: “Our history: Who was Cincinnatus, inspiration for city’s name?” — Cincinnati.com