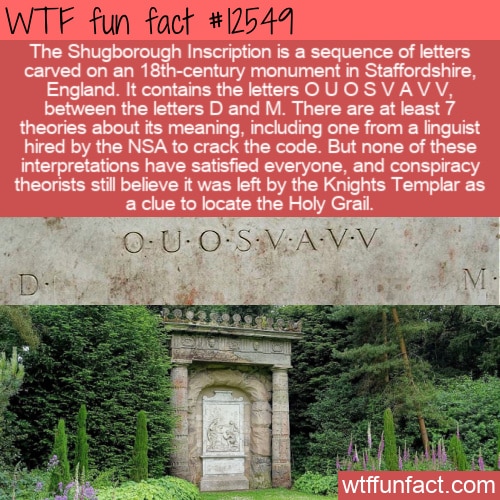 Sometime between 1748 and 1756, Thomas Anson, a member of the British Parliament, commissioned a monument for his family’s estate, Shugborough Hall in Staffordshire, England.

The stone arch features a relief by the Flemish sculptor Peter Scheemakers duplicating a 1638 painting by Nicolas Poussin called The Shepherds of Arcadia. But unlike the painting, the relief includes an extra sarcophagus with the words “I am also in Arcadia.”

But what really gets people riled up about the arch is an inscription on it that no one has explained. Of course, it can simply be something personal to the family, but pseudohistorians and conspiracy theorists have deemed it something bigger – a mysterious ciphertext.

The inscription is a series of letters – O U O S V A V V – between the offset letters D and M.

According to the most likely theory, handed down by Keith Massey, a linguist who teaches Arabic and Latin and was hired by the NSA to crack the code, it’s not a secret message worthy of worldwide attention.

For example, the letters D M can be found on Roman tombs and stand for Dis Manibus, which translates to “dedicated to the shades.”

With this clue in place, Massey postulated that the rest of the letters stood for “Oro Ut Omnes Sequantur Viam Ad Veram Vitam,” or “I pray that all may follow the Way to True Life.”

Frankly, that seems like a good enough explanation for a random monument in someone’s backyard. But the fact that people (including the likes of Charles Darwin) had been trying to decipher it for many years indicated to some that it has a much deeper meaning. Of course, there’s no way of knowing if that’s true, and it seems unlikely.

But conspiracy theorists won’t be denied their conspiracies. They’ve been egged on by the book The Holy Blood and the Holy Grail, which hypothesized that a secret society called the Priory of Sion is helping to keep the secret that Jesus married Mary Magdalene and had children. The authors acknowledge the book is fiction, but their passing reference to Poussin being a member of this group and his painting The Shepherds of Arcadia holding some clue to the location of the Holy Grail (which, in this case, is not a vessel but Mary Magdalene herself) has been enough to keep the conspiracy alive.

A spokesman for Shugborough House says they get numerous messages each week of someone claiming to have solved the “mystery,” and they’ve largely started ignoring them. After all, they could simply be initials or stand for something that would only be meaningful to the family that once lived there. But they are also partly to blame for the continued interest since a promotional campaign they launched to get more tourists made repeated references to the storyline in The Holy Blood and the Holy Grail. –  WTF fun fact