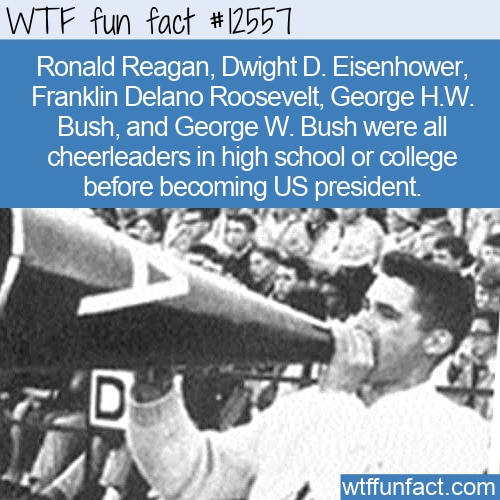 Cheerleading is a very athletic sport. And for men who join the squad, it requires a lot of strength. Still, we were surprised to learn that some former US presidents were high school or college cheerleaders – it’s just hard to picture!

But not only were five presidents former cheerleaders, but some other prominent politicians were too. In fact, if a few elections had gone the other way, we’d have even more presidential pom-pom-wielders.

The first presidential cheerleader was Franklin D. Roosevelt. He cheered on sports teams from the sidelines at Harvard in 1900 and stayed on the squad for five years.

Dwight Eisenhower was a member of the West Point Academy football team until a knee injury ended that. But he loved sports, so the next best thing was to become a cheerleader for his former teammates.

Ronald Regan was all about the extracurricular activities at Eureka College, joining the acting club, serving as a radio announcer, student body president, and member of the swim and football teams. He also joined the cheerleading squad to root for athletes in other sports.

George H.W. Bush was a cheerleader at Yale, just as his father before him (and his son after him). He was also the president of his fraternity, a member of the Skull and Bones society, and captain of the baseball team.

George W. Bush had become a cheerleader at his high school Phillips Academy before joining the Yale squad. That makes him a third-generation male Yale cheerleader!

Now, there are some other prominent political figures who were cheering for their sports teams with pom poms back in their school days as well – none other than Ruth Bader Ginsberg was one of them. Trent Lott is another.

And had Rick Perry or Mitt Romney won their elections, they would have added to the list o presidential cheerleaders as well!

Source: Which four US Presidents were also cheerleaders? — Grunge