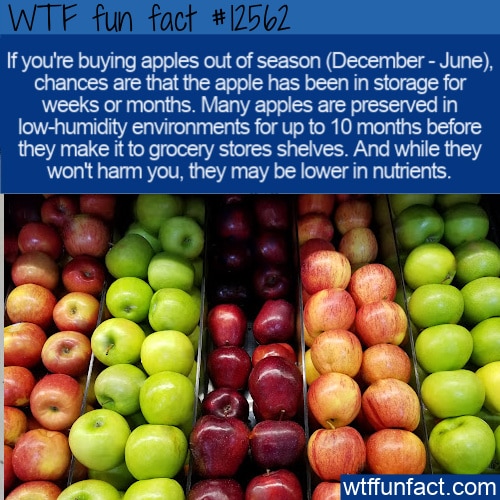 In general, the food industry does its best to keep the amount of time between harvesting food and putting it on grocery stores shelves to a minimum. But a few years back, a story went around claiming that if you bought apples out of season, you could be eating something more than a year old because apples are preserved in wax and refrigerated after harvest.

Apple harvests begin in July in the U.S. and are over by mid-December, depending on location and how early the apple variety ripens. So how old is the apple you buy in May?

Well, it very well could be months old. While the apple industry and FDA have fought back against this “myth,” they still largely have to admit that there can be quite a bit of time between harvest and purchase.

AllRecipes tried to debunk the myth, but a quote by Mark Seetin, Director of Regulatory & Industry Affairs at USApple in defense of the apple industry reads:

“According to data gathered by USApple, roughly 40 percent of each year’s apple crop is marketed by December 1 of the harvest year — most of which goes from harvest to store shelf without being placed in storage. The remaining 60 percent of the crop is moved to the market over the next roughly 8 months.”

Ok, so it’s not a year, but it’s a lot longer than we thought. Most of us probably assume that our out-of-season apples come from somewhere outside the U.S. where they are in season. And that may be the case at times, but it’s also the case that most apples are sold out-of-season and come out of temperature-controlled, low-humidity storage. A well-preserved apple can last up to 10 months in storage.

“To slow the proverbial sands of time, some fruit distributors treat their apple bins with a gaseous compound, 1-methylcyclopropene,” TODAY quoted the USDA as stating. “It extends the fruits’ post-storage quality by blocking ethylene, a colorless gas that naturally regulates ripening and aging.”

What’s most important here is that while it might seem disturbing at first, it’s really not a problem, health-wise. However, the nutrient content of the apple is likely to diminish over time. So we can’t guarantee that it’ll still keep the doctor away.

Source: “That apple you just bought might be a year old – but does it matter?” — TODAY