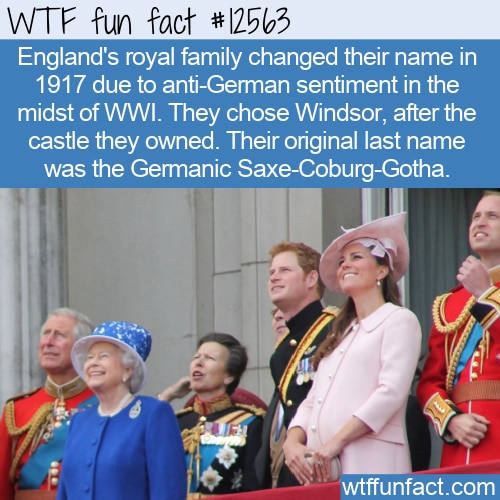 The House of Hanover was on the British throne until 1901 until the ascension of King Edward VII, the son of Queen Victoria and Prince Albert of Saxe-Coburg and Gotha.

But the Saxe-Coburg and Gotha name was short-lived among the British royal family. That’s not because another family took over, but rather because the family decided to change its name in the wake of anti-German sentiment in 1917 during World War I. The last straw before the name change came when an aircraft called the Gotha G.IV participated in the bombing of London.

So, while today we know the British royal family as the Windsors, they are the same Saxe-Coburg and Gothas that ruled at the beginning of the 20th century.

The forced abdication of the Emperor of Russia, Nicholas II, who happened to be a cousin of British king George V, gave the monarchy even more to think about. So when they changed their name, they also abandoned or anglicized the rest of their German titles and houses.

On July 17, 1917, a royal proclamation issued by George V declared:

“Now, therefore, We, out of Our Royal Will and Authority, do hereby declare and announce that as from the date of this Our Royal Proclamation Our House and Family shall be styled and known as the House and Family of Windsor, and that all the descendants in the male line of Our said Grandmother Queen Victoria who are subjects of these Realms, other than female descendants who may marry or may have married, shall bear the said Name of Windsor….”

Of course, the name Windsor didn’t pop out of thin air. They took the name from Windsor Castle, a royal property and the center of royal social life, in the town of Windsor, England. It is now the permanent home of Queen Elizabeth II.