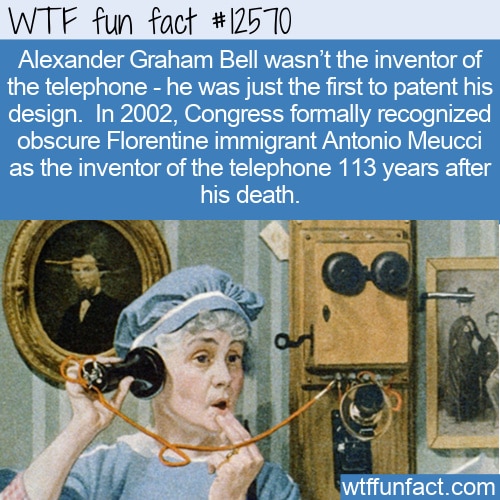 In 1876, Alexander Graham Bell was one of a handful of men who were working on a machine that transmitted vocal communications telegrphically. But we only remember him because he got to the patent office first (and he was already a well-known inventor).

Historians and government officials have since reexamined the research and found that Bell wasn’t actually the first to create the world-changing technology. That honor goes to an Italian-American immigrant and mechanical genius from Florence, Antonio Meucci.

In fact, in 2002, U.S. Congress recognized an impoverished Florentine immigrant as the inventor of the telephone rather than Alexander Graham Bell. The Guardian reported, “Historians and Italian-Americans won their battle to persuade Washington to recognize a little-known mechanical genius, Antonio Meucci, as a father of modern communications, 113 years after his death.”

“It is the sense of the House of Representatives that the life and achievements of Antonio Meucci should be recognized, and his work in the invention of the telephone should be acknowledged,” the resolution stated. (You can read the resolution (107th Congress, H Res 269) on Congress.gov.)

While you might think there was a mad dash to the patent office, it’s actually the case that 16 years went by between Meucci’s demonstration of his “teletrofono” in New York in 1860 and Graham’s 1876 patent.

However, it was Bell’s telephone design that ended up being used to create the first telephones, so he does deserve some pretty massive credit. It’s just that Meucci deserves some and well and never really gets it.

The title of the most annoyed competitor of Bell’s likely goes to Elisha Gray, a professor at Oberlin College. He actually sent his lawyer to the patent office on the same day. Bell’s lawyer got to the desk first on February 14, 1876. His filing was the fifth entry of the day, while Gray’s lawyer was 39th. The U.S. Patent Office awarded Bell with the first patent for a telephone (US Patent Number 174,465).

Some historians actually claim that Bell knew what was happening and may have bribed someone at the patent office to doctor documents showing his patent came in first, but we’ll probably never know. – WTF Fun Fact

Source: “Who is credited with inventing the telephone?” — Library of Congress